Template:Game Template:InfoWeapon358 When at his full strength in Kingdom Hearts II and Kingdom Hearts 358/2 Days, Roxas is able to use his Synch Blade ability to wield Oathkeeper and Oblivion, two Keyblades symbolic of Sora's memories of Kairi and Riku, respectively.[1] Roxas is able to wield two Keyblades because he is the Nobody of Sora, who possesses his own heart as well as Ventus's.

Roxas is not able to use his Synch Blade at first because of Xion's existence, but her destruction awakens the ability, which he activates as he begins his assault on The World That Never Was. However, he is confronted by Riku, who defeats him and drags his unconscious body back to Twilight Town, where he is given false memories in order to keep him complacent within the Simulated Twilight Town. However, by the sixth day there, Roxas has regained his memories, and when Axel attacks him for leaving the Organization, Roxas summons the two Keyblades and defeats Axel.

In the Story Mode of Kingdom Hearts 358/2 Days, Roxas can only dual-wield the Oathkeeper and Oblivion during Mission 93. However, in Mission Mode he can wield the two Keyblades by equipping the Zero Gear with three Ability Units.

Roxas's ground combo begins with two slashes, left to right, then a spinning move, all done with a simple press of the Template:Button button. From there, a Template:Button-Combo is prompted, which will lead the combo into another two slashes, left to right. Another push of the Template:Button button will result in another slash with the Keyblades, then an upward slashing movement with some spin. With one final push of Template:Button, Roxas's Keyblades will spin around him and fly into his hands, causing damage to enemies. When a normal combo is continued, it will lead into another set of two slashes, followed by another slash with some spin. Roxas will slide forward, a Keyblade extended, and slash with his other hand as a follower, and it will conclude with Roxas poising his Keyblades behind to him, then unleashing a devastating "X"-like slash with both weapons.

The aerial combo begins with two quick slashes to the left and right, followed immediately by a mid-air slash with some spin, two moves that could easily be mistaken as one. Another Template:Button-Combo is prompted, which will result in an early usage of the aerial combo's finisher. The normal combo continues with another set of two slashes, one going up and another going left, which is followed by a sideways slash along with a powerful uppercut. The combo finishes with Roxas's Keyblades flying around him dangerously, then flying back into his hands. 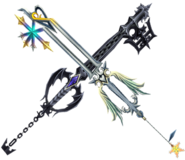 Oathkeeper and Oblivion as they appear in Kingdom Hearts II.
Add a photo to this gallery

Retrieved from "https://kingdomhearts.fandom.com/wiki/Oathkeeper_%26_Oblivion?oldid=721821"
Community content is available under CC-BY-SA unless otherwise noted.