Beauty and the Beast

Mrs. Potts is very motherly in nature, which befits her as she is mother to the teacup Chip and his other brothers and sisters (the latter are not featured in the Kingdom Hearts series). As the castle's head housekeeper, she has a very strict sense of responsibility.

Often she is kind and consoling, but can be stern when the situation calls for her to be; out of all of the Beast's servants, she is the one who will most likely confront him about his behavior when he is in a temper (depending on how extreme the Beast's mood is).

The curse transformed Mrs. Potts into a large, white teapot. She has blue-green eyes and thin, black eyebrows. Her base is purple with gold lining and a pale, alternating pink and blue pattern on it. The lid on her head is purple with wavy edges and gold lining. The handle is a pink ball on the top of the lid.

Mrs. Potts made her first physical appearance in the Kingdom Hearts franchise in Kingdom Hearts II. Prior to Sora's arrival at Beast's Castle, Beast was being taunted by Organization XIII member Xaldin. In his rage, Beast locked up his servants (including Mrs. Potts) in the castle dungeon. When Sora, Donald, and Goofy arrived at Beast's Castle, they were sent to rescue the servants at Belle's request. Upon entering the dungeon, Sora and company were surprised to find that the cell, which supposedly held the imprisoned servants, only contained household objects.

Cogsworth, the castle's butler, was reluctant to reveal himself to Sora, but Mrs. Potts immediately suggested that it was safe, noting that Sora and his friends did not look like "them" (it can be assumed she was referring to the Heartless). After introducing themselves to Sora, the servants explained their situation: the Beast was once a prince who had been cursed by an enchantress to appear as a monster for his selfish and uncaring personality, and they (the servants) had been cursed to appear as household objects so that the Beast would be responsible to change his ways not only for his own sake, but for theirs as well.

Once freed from the dungeon, Mrs. Potts and her son Chip (a teacup), along with Cogsworth (a clock) and Lumiere (a candelabra) guided Sora, Donald and Goofy through a secret passage out of the dungeons to avoid any attacks by the Heartless. However, lanterns throughout the passage were seeping with darkness. Mrs. Potts played a major role in getting the group past this obstacle as she followed Sora to each lantern and doused the darkness with water from her spout.

After exiting the passage, Mrs. Potts, Chip, and Lumiere departed from the group to attend to their duties in the castle, staying in the parlor to avoid confrontation with the Heartless. They remained out of the main action until after Sora, Donald, Goofy and the Beast rescued Belle from the Shadow Stalker/Dark Thorn that Xaldin had set after her. Following this event, along with a small amount of bickering between Belle and the Beast, Mrs. Potts attempted to remain optimistic that the two would manage to develop a stronger relationship.

When Sora returned to Beast's castle later on in his journey, it was to find that the servants had organized a special evening for Belle and the Beast in an attempt to bring them closer together. When Xaldin showed up to crash the party, Belle, Mrs. Potts and the other servants retreated to the safety of the ballroom's balcony. After Sora and the Beast defeated Xaldin's Nobodies, the Beast ran to his room to ensure that Xaldin had not stolen his rose. Mrs. Potts seemed especially concerned about the rose, though she would not say why.

When it was discovered that the rose had indeed been taken, and that the Beast had banished Belle from the castle in his despair, Sora finally decided to find out why the rose was so important. Mrs. Potts helped explain that the rose represented the countdown to when the Beast would have to find true love or remain as a beast for all time. She and the other servants begged Sora to help the Beast, which he did, eventually defeating Xaldin and taking back everything that was precious to the Beast.

In the end, Mrs. Potts watched Belle and the Beast make amends, and made the observation that Belle was unique in that she's "always ready for a little adventure." In the credits for Kingdom Hearts II, it is shown that the Beast had been restored to his human form, implying that Mrs. Potts had also become human again.

Mrs. Potts cannot completely destroy darkness, but she can assist in doing so by showering it with water from her spout. However, to completely get rid of any darkness, she requires the aid of the Keyblade and Lumiere's candlelight.

Mrs. Potts made her first appearance in Walt Disney's Beauty and the Beast in 1991. The idea that she and the other servants appear as enchanted household objects was originally suggested by the movie's lyricist, Howard Ashman. Thus, she was an entirely original character by Disney, having never appeared in other incarnations of the Beauty and the Beast story prior to Disney's version. 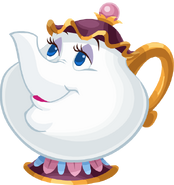