Sharp spikes cover these large Heartless, a fact they exploit in a dangerous spin attack.
Though they are impervious while spinning, you can slow their onslaught with a block, bringing them to an eventual halt.
Alternatively, Aero magic will stop them with a single blast.

When its HP gets low, it unleashes its Press attack. Use Bump and Meteor Strike for a counterattack combo!

Meteor Strike can be done in succession, so make sure to grab surrounding enemies as well!
Spiked Crawler
Scorching Sphere
Gummi Hammer

A Morning Star has a black, spherical head with two beady, yellow eyes on it. It wears a conical, green helmet with an angular antenna attached to its tip. The majority of its body is encased in a spherical suit of armor with eight conical, black spikes spaced evenly over its surface. This armor is primarily colored in shades of green, with some yellow decorations on it. Its thin arms jut out of circular openings in the armor on either of its sides.

Its spindly legs share a large, circular opening at the bottom of the armor, and the tips of its feet point upward. It can retract its arms and replace them with two large spheres covered in spikes, which it uses to beat enemies. The Morning Star has two Heartless emblems, on its front and another on its back, both of which are placed in the middle of a blue ring with a black background.

In Kingdom Hearts II Final Mix, the Morning Star's armor becomes blue with cyan, violet, and some yellow highlights on it. Its spikes are now silver, as opposed to the normal black.

The Morning Star starts off most of the time spinning. It will be invulnerable then. If it starts coming towards you, you can Dodge Roll out of the way, simply run out of the way, or Block it.

After a while, it will stop spinning, leaving a good opportunity to attack. After it stops spinning, it will drag itself along the ground, moving with its hands. But when it stops, it will attack you again. 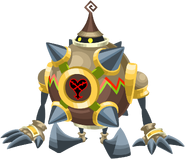