A Monotrucker is a black-skinned, humanoid Unversed with a teal wheelbarrow in place of its lower body. This wheelbarrow has silver highlights and a single, black wheel for locomotion. Its head is round and vaguely triangular and sports two short ears or horns on the top of its head. Another antenna sprouting out of its forehead suspends a cylindrical, blue lamp.

Its arms both end in gold and silver pickaxes. Its red eyes are set in an angry expression and the Unversed emblem is emblazoned on the front of its wheelbarrow. The Monotrucker's overall design is meant to resemble a miner, a reference to the Dwarf Woodlands, its primary world.

In Kingdom Hearts Birth by Sleep Final Mix, Monotrucker receives a palette swap which gives them a darker body, the wheelbarrow is now a lighter shade of blue, its arms both now end in gold and red pickaxes.

A Monotrucker's only two attacks are to strike players with its pickaxe arms and charge at players. A few hits will kill it quickly, or magic will work as well. Command Styles and Shotlocks work wonders when attacked by a group. There is a 60% chance that they drop the Strike Raid command when defeated. 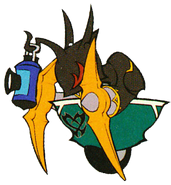