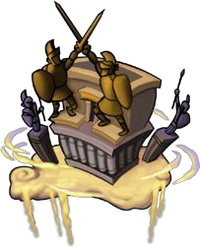 Mission 84 in Kingdom Hearts 358/2 Days sends Roxas and Xigbar to the Olympus Coliseum where they must defeat a Scorching Sphere.

Roxas and Xigbar are sent to eliminate a Scorching Sphere that has appeared in Olympus Coliseum.

To unlock this mission, talk to Luxord in The Grey Area during days 322-326. He requires that you should have opened all the treasure chests in Mission 82.

You'll be needing Blizzard magic, Block, and Hi-Ether panels for the Scorching Sphere later. You'll be appearing Outside the Coliseum as usual. Grab the Unity Badge in the northeast area. There are also two chests. One in the southwest area that contains a Firaga Recipe, and one that contains a Tricky Monkey. Once you are ready for the boss battle, proceed inside the Coliseum Vestibule and to The Coliseum. Once you go to The Coliseum, the battle will begin immediately.

Before you start your battle, grab the Ordeal Blazon in the northern area and the Ordeal Badge in the southern area. The Scorching Sphere is bigger than the Morning Star, and can inflict the Ignite status if you're hit, making this mission more difficult. It will start to spin around as soon as it appears. You can block up to three times but if you're fast enough, you can Glide up to it and cast a Blizzard spell, which will stop it in its tracks. It uses the exact same tactics as the Morning Star, so dodging it and retaliating should be simple. However, if dodging is just too difficult, one can always resort to blocking. Using Blizzard magic, especially Blizzara, will help deal more damage. Xigbar is a very helpful ally on this mission, as he will occasionally cast Blizzard spells to further damage the Sphere.

Once defeated, you can obtain a Gear Component D and can RTC.

Bringing Blizzard and Blizzara spells will help clear this mission. Glide up to the Scorching Sphere and quickly cast Blizzard to keep it from running around, then strike it with Blizzara spells. The Darker than Dark+ Keyblade is highly recommended, as it greatly increases magic power. Also having the Frozen Blight equipped would help because of the Blizzard Finish and Magic +8. 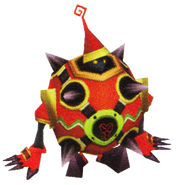 Tricky Monkey
Add a photo to this gallery