View source
watch 06:00
Wiki Targeted (Games)
Do you like this video?
Play Sound 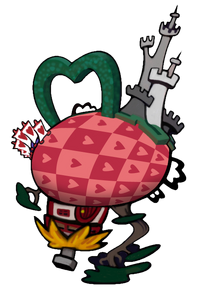 Mission 81 in Kingdom Hearts 358/2 Days is an optional mission that sends Roxas to eliminate the last of a strange pacifistic Heartless.

This is the last of the three Emerald Serenade missions, and is essentially the same idea as the previous two. The main difference this time around is that Roxas is on his own; make sure you bring plenty of magic and Hi-Ethers to take on the Serenade by yourself.

As always, the Emerald Serenade travels on a set path; it won't attack you, but it moves just fast enough so it can't be chased down and only gets faster the more damage it takes. An ambush is the key, but the spot in this one should be chosen carefully as the Serenade will move even faster than before once hit. There is an excellent spot in the southwestern area of Red Rose Maze 2; it is the slightly open area towards the corner that leads to two dead ends and is marked by two heart-shaped hedge gates. The Serenade tends to pause as if its going to travel down one of the dead end areas instead of continuing on the main path. It's a great spot to target it with magic spells or attacks; you shouldn't even have to lock on for a successful hit. Fire, Blizzard, and Aero magics are your best bet; especially the first two. You should have no problem freezing it in place with a Blizzard spell before hitting it again with a physical attack, or better still, a Fire spell that will cause it to alight and continue to take damage as it speeds along. Watch out for Grey Caprices; their teleportation power can really mess you up on this mission, so get rid of any surrounding the area you choose to fight the Emerald Serenade at.

Once you destroy the Serenade, grab any remaining chests and head back to the Hedge Maze Entrance to RTC. You will also want to keep an eye out for a Rare Vendor at the dead end north and a little west of the east exit in Red Rose Maze 1.

As with any Emerald Serenade mission, this can take a while to complete due to the constant movement of the Serenade. Chasing it doesn't work at all, so you have to find a spot where you can ambush it. Alternating between the uppermost spacious area that it travels through and the crossroad where you find the last button in the Novashadow mission is a good idea. When the Serenade gets close to one of those spots, cast Blizzara, as it is more effective than Blizzaga. If it freezes, Cast Firaga on it, which will deal heavy damage due to the Serenade being frozen and will likely burn it. While it's burning, move to the other spot, cast Blizzara again when it gets close, then rinse and repeat. As it moves faster when it's HP gets low, it will arrive at those spaces faster, so have max Haste and Glide on you so that you can reach those spots before the Serenade. Also, timing is key, as the Heartless should be close enough to hit the Blizzara before it dissapates, but not so close that it will pass by while you're casting. You should nab all 3 sigils easily this way, though it may take a while to get the hang of it.