Missiom 77 in Kingdom Hearts 358/2 Days sends Roxas to Neverland to eliminate a giant Heartless that has appeared.

Roxas returns to Neverland to eliminate a giant Heartless, but before he can do so, he learns that Tinker Bell has been captured by Captain Hook, and he decides to save her.

Captain Hook and Smee have finally captured Tinker Bell. Follow the two back to their ship and enter the Captain's Cabin. Roxas frees Tink, who then finds a map marked with a digging spot. Check the corner of the sofa on the west side of the room to find another piece of the map. While there other points of interest to examine, some of them release Heartless. After leaving the Captain's Cabin, fly to the highest crows nest (top, middle one) and land there to find the Ordeal Badge.

Exit the Captain's Cabin and fly up to the helm. Examine the steering wheel to find another map segment. Now all the correct digging locations are on the map, so return to the Night Sea to dig.

Fly to the locations marked in red on the map and strike the ground there to dig up a treasure box. During Roxas's first attempt, he's disappointed to find that no Heartless pop out. At that point, Hook and Smee appear on the north central island near the dark corridor. Land on that island to begin the battle against the Phantomtail, before or after collecting items.

As in all Challenge Missions that restrict the use of recovery magic, be sure to replace your Cure, Cura, and Curaga panels with restorative items, such as the Hi-Potion. The stronger form of the Phantomtail shouldn't be too bad, so long as you be sure to bring along plenty of long range magic panels and do not attack its head. 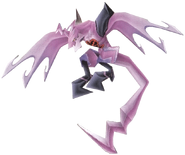 Possessor
Add a photo to this gallery