Mission 14 in Kingdom Hearts 358/2 Days sends Roxas for his third mission with Xion, in order to destroy a powerful Pureblood Heartless: a Darkside.

A Darkside has surfaced in Twilight Town. Team up with Xion, find it, and eliminate it at once.

After they arrive in Twilight Town, Xion speaks again and uncovers her face for the first time. The two successfully approach and confront the Darkside Heartless. After the battle, the Darkside attacks Roxas, tossing him and his Keyblade away. The Keyblade falls in front of Xion, who picks it up and with a quick slash, finishes it off. Impressed and feeling a connection with Xion, Roxas brings her up to the clock tower and gives her some sea-salt ice cream, just as Axel had with him.

Speak to Xaldin in the Grey Room before heading out on your mission. This results in obtaining a Moonstone.

Kingdom Hearts veterans should have no problems fighting Darkside. It uses the same strategies It has in any other game. Before you begin the battle proper, make sure you snag the lone chest to the right of the Station entrance, as you will RTC when the battle is over.

Avoid all battles as you make your way to fight the Darkside. Stocking many magic casts and carefully studying its attacks will help you get through the battle without getting hit. As the Mission Intel indicates, be sure to equip Block to help protect you.

The boost in enemy level will make this a difficult mission. Set yourself to a high level, and equip a strong, aerial-themed weapon, such as Abyssal Tide, Leviathan, and their upgrades.

Again, skip all non-essential battles and head directly for Station Plaza. Attack the Darkside's hands whenever possible, and strike its head whenever it bends forward to cause extra damage.

If the battle is still going too slowly, try to pull off a Limit Break to inflict damage quickly. Hitting the Darkside on the head can prove deadly...for the Heartless. 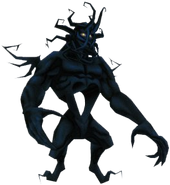