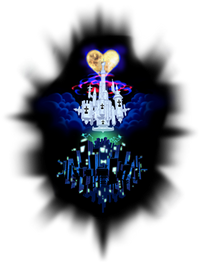 Mission 10 in Kingdom Hearts 358/2 Days is Roxas's first mission in The Castle That Never Was. In this mission, Organization XIII tests Roxas's endurance by having him attempt to survive the attacks from a swarm of Dusks for a complete minute.

Herein we will determine your fitness for future missions by conducting an assessment of your combat ability. Prove your endurance by surviving for one minute in the arena we have set up for you in the castle. Fight, or flee—but whatever you do, think fast.

Roxas avoids the attacks of Dusk Nobodies or fights them head-on in order to prove his endurance for Organization XIII.

Before executing the mission, should the player choose to speak to Zexion or Marluxia, he/she will obtain two items: An Ether from Marluxia, and a Panacea from Zexion.

This mission takes place at a small area known as the Hall of Empty Melodies. Roxas's goal is to survive the attacks from Dusk Nobodies for one full minute. While it is possible to survive by simply Dodge Rolling or otherwise evading the Dusks for a full minute, it is possible even at this point in the game to destroy each of them before they decide to attack. Even if you don't destroy the Dusk, you can stagger it to prevent it from attacking. While more Dusks will appear to replace any that are destroyed, it is again possible to defeat them within the window between the Dusk appearing and deciding to strike.

If you decide not to attack, continuously Dodge Roll from corner to corner of the platform. Feel free to heal if you are close to death.

On a related note, this mission is the most efficient way to fulfill Xigbar's requests for Roxas to defeat a certain amount of enemies with Limit Breaks and Final Limits. By that point of the game, your Defense should be high enough that you could complete the mission by standing still, and your Strength should be high enough that a Limit Break can defeat up to five Dusks at a time. Make sure to disable any Auto-Dodge Roll or Auto-Block panels beforehand, though. Once you start the mission, simply stand still until the Dusks bring you to the Danger Zone, and then unleash your Limit Breaks.

On higher difficulties, this mission is practically impossible without an advanced Panel deck, and if you try it as soon as it is available, your only real advice is to stock Cure magic and rely on luck.

If you attack this Challenge at a later point in the game, it is much easier. Dodge Rush and Dodging Deflect are the best possible panels for this, as they allow you to automatically stagger or deflect the Dusks instead of just Dodge Rolling at them.

Dusk
Add a photo to this gallery