The Mimic Master is a humanoid Unversed that dresses in a dark blue graduation gown with numerous intersecting bronze highlights. It resembles the Barrier Master Heartless. It also has large cuffs, a white ascot, and black, fingerless gloves. Its legs are not visible because of its gown. Its head is cube-shaped and light steel blue. It has a flat, square crest on its head resembling a mortarboard cap. The tassel hanging from this "cap" is a small, purple sphere attached to a gold crescent moon. This charm hangs from the right corner of the Unversed's cap via a short, gold chain. Its large, red eyes are set in a seemingly happy expression. It also carries a massive, pink book as a weapon.

The Mimic Master has more Unversed emblems on its person than any other Unversed, sporting one on the front of its robes, and one on both covers of its book, leaving it with a minimum of three emblems. Several pages of the Unversed's book seem to be emblazoned with the insignia as well, though others display black and white pictures of Terra, Ventus, and Aqua in their armor.

In Kingdom Hearts Birth by Sleep Final Mix, the Mimic Master receive a palette swap which gives its body a shade of grey, dress in a lighter blue graduation gown with numerous intersecting yellow and dark-purple highlights. It has dark-yellow cuffs, a dark-purple ascot, and grey, fingerless gloves. Its mortarboard cap shape head is now grey with black edges. The tassel hanging from the "cap" is now a small, grey sphere attached to a gold crescent moon. It now carries a purple book.

The Mimic Master will appear as the final boss in the Dead Ringer round, one named specifically for it, four waves of lesser Unversed having to be defeated before it can be faced. This boss can be quite challenging to the unprepared or reckless player, so be sure that Terra, Ventus, or Aqua is at a relatively high level and has the strongest abilities as possible equipped. Shotlocks, Command Styles, and D-Links are also available for use.

Depending on the character the player chooses to battle as, a different strategy may need to be used than one that can be used for another character. Considering the player will have a rather high attack power and friends may be present to aid in the fighting process, these are advantages that just may turn the tide of the battle and should not be taken for granted.

At the start of the battle, the Mimic Master will fly around the arena, its book-like weapon engulfed in damaging flames. Use Block or Barrier (depending on the player's character) to avoid the attack. Remain in constant motion; if the Unversed boss is performing this tactic out of range to avoid it catching up to the player character. When the Mimic Master settles down, the player can then proceed to bombard it with long-ranged attacks such as Reflect Blitz or even standard physical combos (if one is careful) with a powerful Keyblade such as the Ultima Weapon.

The player should be careful if fighting it at close range, as it can attack players by smacking them with its book. The player should then flee if a counterattack seems inevitable and set a trap for the boss such as a Mine Square attack for it to run into and receive damage from as it attacks. This will, in turn, interrupt its dangerous combos. If the Mimic Master vanishes for a moment and its book levitates around the battlefield, jump and use an aerial movement ability such as Double Flight (Aqua), Glide or Superglide (Ventus), or Air Slide to escape the flurry of pages it sends out as it reappears to attack the player.

If pages from its book start to levitate around the Mimic Master, it will shoot long-ranged lasers at the player as it spins slowly around the battlefield. These laser beams can Blind the player if they aren't careful, so jump and use an aerial movement ability each time the lasers are about to hit in order to avoid them as best as possible. While the Mimic Master will only reuse previously seen attacks for the majority of the remaining battle, it has one last, deadly technique it will use as its HP dwindles.

First, the Unversed boss will shine with a dark aura. It will then vanish, its book starting to glow. It will then rush at the player, the boss reappearing as a splitting image of the player's character. While in this form, the Mimic Master's HP vanishes, replacing it with a format similar to the player's. It will also copy the player's nickname with mixed letters as a confusion technique. To revert the Unversed to its true form, merely destroy the book pages it scatters across the battlefield. The Mimic Master will then repeat its cycle of attacks from the beginning until its eventual defeat.

The Mimic Master is fought a second time in the Copycat Crisis round. The same strategies utilized in past battles can be used to defeat it this time, as it will use the same attacks as in the first battle in its attempt to conquer the player. The only difference in this battle will be the boss's decreased HP amount. As such, the player should make sure that their character is at a relatively high level, having his or her most powerful abilities equipped.

The player should also have a powerful Keyblade equipped. This will not only ensure that maximum damage is dealt to boss, but also that the player's character takes as little damage as possible. As always, remember Terra, Aqua, and Ventus's different fighting styles, make full use of Command Styles and the like, and be sure to heal if necessary. 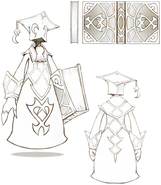