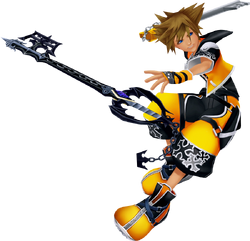 Master Form (マスターフォーム, Masutā Fōmu?) is a Drive Form which appears in Kingdom Hearts II and Kingdom Hearts II Final Mix. It uses both of the player's party members, and consumes four of Sora's Drive Bars. It represents the fusion of Valor Form and Wisdom Form,[1] and is obtained when Sora reunites with King Mickey at Hollow Bastion.

Master Form is the third Drive Form to be obtained, after Valor and Wisdom (or the fourth Form obtained in KH2FM due to the presence of Limit Form). Subsequently, it acts like somewhat of a hybrid between the Valor and Wisdom, with a focus on both magic and strength. When in this form, Sora wields two Keyblades and his magic skills are strengthened: the use of magic becomes endless, allowing the player to add magical attacks into combos without reducing the amount of physical attacks the player can do, more than doubling the amount of attacks that can be input before the ending combo. Both his physical and magical attacks have a basis on crowd control, with a wider attack range.

Master Form is very good for aerial combat, supported by its higher-than-average jump, the Aerial Dodge ability, and movements that keep Sora in the air, making all of his attacks aerial based. In Master Form, Sora's running and jumping speed are 25% higher than normal, his jump height is 150% and a second jump is possible while in the air, and his maximum midair combo length increases by 2.

Master Form bears a yellow and black color scheme. It is the last Drive Form that Sora gains through the story, apart from Final Form, which is obtained through gameplay. The symbols on his pants are three black crosses arranged in a fancy overlapping pattern. When in Master Form on any world, pale yellow sparkles constantly fall off Sora and create somewhat of a streak behind him when running. Also, the floating Keyblade is held in place by a yellow aura surrounding Sora's hand and the Keyblade he is physically holding seems to have deep yellow electricity flowing through it.

Master Form as an item.

Data Sora in Master Form.
Add a photo to this gallery

Sharing similarities with Wisdom Form, Sora magic spells are powered up while in Master Form. Each individual cast is greatly enhanced, and Sora moves quickly while casting. Of note is that magic spells no longer have finishers, meaning Sora can cast constantly as well as consistently.

Master Form earns points for every drive orb collected, with large orbs granting three times as many points. To level this form quickly, both Oathkeeper and Follow the Wind are recommended, for the Draw and Form Boost abilities. It is also a good idea to make sure the player has as many Draw abilities equipped as possible. In KHIIFM, Sweet Memories becomes a choice Keyblade to equip when leveling Master Form due to its Drive Converter that converts Munny drops into Drive Orbs. This, combined with Sora's own Drive Converter that he gains via leveling up, potentially changes good sources of Munny to good sources of Drive Orbs.

One of the best worlds for leveling Master Form is The Land of Dragons. Begin by travelling to the Checkpoint and clearing the area of Heartless. Change into Master Form and use fire to destroy the three destructible wagons around the area. Alternatively, the Air Pirate Heartless' "Air Twister" Reaction Command draws in all entities towards Sora, including the wagons. Collect the orbs and exit the area. Return immediately to the Checkpoint to find the wagons have respawned, while the Heartless have not. Destroy the items again, travel one zone away, and repeat the process as needed. This same process can also be applied to the Ridge area, where repeatedly destroying the two item clusters there can have the Form lasting for as long as the player needs it to. This strategy, however, does not work in Kingdom Hearts II Final Mix, where the items clusters only respawn under the same circumstances that the Heartless do.

For a different approach in The Land of Dragons, the Emperor's Throne Room leads directly to the Antechamber, where several Assault Rider Heartless appear. Finish off the Heartless, which appear in three waves. Return to the Emperor's room, leave the world, and return immediately for a MAX gauge. This strategy can be one of the quickest ways to level Master Form.

Beast's Castle as a whole contains a number of Heartless that drop Drive Orbs, including Hammer Frames and Gargoyle Knight/Warriors. The real targets, however, are the Crimson Jazzes and Morning Stars. The West Wing outside Beast's Room contains a handful of Hammer Frames, two of each Gargoyle type, and three Crimson Jazzes. Magnet in combination with Thunder even normal combos will make quick work of all Heartless. At higher levels, the player may exit into the West Hall and continue farming the Heartless before needing to return to the Save Point in the Beast's Room, or even the one in the Dungeon.

For Kingdom Hearts II Final Mix, the Cavern of Remembrance is a great place to quickly level. Head into the Mineshaft and change into Master Form next to the two balloons. Hit the balloons to gain drive orbs. Then head out into the Depths and head straight for the door, hitting the balloon next to the ladder. Exit Hallow Bastion through the save and return to do it again. This strategy can earn the player 126 experience per loop.

A final, optimal strategy for Kingdom Hearts II Final Mix requires the aforementioned Drive Converter abilities. Travel to the Mysterious Tower and head for the Moon Chamber. Four Gambler Nobodies will appear. Simply beat one of their challenges to acquire a staggering amount of large Drive Orbs, and leave for a Save Point when needed.