Fear leads to obsession with power, and obsession beckons the Darkness.

Master Eraqus is a strong Keyblade master, caring for Terra, Ventus, and Aqua as his own children. Stern and willing to instruct, one major goal he has in life appears to be preserving peace throughout the worlds, as he rashly attacks Ventus when Eraqus discovers that through his dark half, Vanitas, Ventus can create the χ-blade, the weapon that sparked the Keyblade War and the means Master Xehanort intends to use to fulfill his goals. Unlike Master Xehanort, Eraqus has an open aversion to darkness, believing that it must be destroyed at all costs, and has at least partially ingrained these beliefs into his apprentices.

Despite his sometimes cold actions toward his apprentices, he still cares deeply for them. He has Aqua look after Terra as he travels the worlds because he is concerned for him, apologizes to Ventus and appears deeply pained before he attempts to attack the boy, and sheds a tear when he is forced to face off against Terra. Despite his relationship with Xehanort having been strained over the years, Eraqus seems to attempt to overlook his former friend's past actions to a degree. Even after he and Xehanort have a fight that results in Eraqus being scarred, he still asks Xehanort to watch over the Mark of Mastery with him. Even despite Xehanort having ruthlessly killed him, Eraqus retained his fondness for his old friend, as his spirit appeared in the end to reason with Xehanort successfully, which allowed his fallen friend to redeem himself, and as Xehanort started to collapse, Eraqus happily offered to help him ascend, showing no malice for Xehanort's part in his death. He also apologized for his actions to his students and showed regret for how strict he mentored them. It was noted by Xehanort, himself a consummate manipulator and strategist, that Eraqus was highly cunning, which is why his heart resided inside Terra to help him resist and also to later appear to aid one last time.

Master Eraqus, like his student, Terra, bears a distinct Japanese influence in his choice of clothing. He wears a white, red lined haori that has a hood, along with slightly shorter than normal, light-colored hakama. Underneath his haori, he wears a navy blue shirt with a large white X pattern on the front. He also has jagged scars over his right eye and left cheek inflicted by Master Xehanort, much like the wounds Braig received from Terra.

Like his pupils, Eraqus wears pieces of armor, in his case gold and black armored boots and a dull blue-green section that covers his abdomen. This second piece of armor sports the same symbol worn by his students near the top. Eraqus's black hair is tied into a short, high topknot, with one bang falling off to the right side of his face. He also has a short, triangular soul patch and a mustache. Eraqus's Keyblade Armor greatly resembles samurai armor, fitting in with his Japanese theme.

Prior to Kingdom Hearts Birth by Sleep

In the past, Eraqus was a Keyblade user alongside his fellow apprentice Xehanort. When Eraqus passed the Mark of Mastery, he succeeded his Master in becoming steward of the Land of Departure while Xehanort was free to travel the worlds as a Seeker.

Years later, Eraqus was reunited with his friend before learning of Xehanort's intent to recreate the χ-blade, the legendary weapon from which the Keyblades were modeled after and which is capable of unlocking Kingdom Hearts, by causing another Keyblade War. When his pleas failed to reach him, Eraqus resolved to strike his friend down, only to be scarred instead. Sometime after, having taken Aqua and Terra under his wing, Eraqus received a new apprentice in Ventus, with Xehanort faking regret to win his friend's trust back for his agenda.

Deeming his oldest apprentices ready, Master Eraqus prepares to hold the Mark of Mastery with Ventus and Xehanort as witnesses. The exam is carried out soon afterwards, with Aqua passing while Terra fails, Eraqus believing that Terra is unqualified on the grounds that he is unable to control his darkness yet personally feels that Terra has potential. Little does Eraqus know that Master Xehanort had used his dark powers to tamper with the course of the Exam itself.

Soon after, while educating Aqua on the responsibilty she now has, they are alerted by Yen Sid that the worlds are being attacked by mysterious creatures called Unversed. With Xehanort missing, Eraqus sends Terra and Aqua to find him while dealing with the threat. Sensing a possible connection between the two events, once Terra is out of view, Eraqus instructs Aqua to look after Terra to make sure he is not tempted by the darkness. However, after Terra departs, Aqua and Eraqus witness Ventus leaving as well, and he instructs Aqua to bring Ventus back.

When Ventus returns of his own will later, Eraqus attempts to welcome him back before the boy confronted him on what he knew about the χ-blade and how he is to make it. Realizing that Xehanort used him for his plan, Eraqus feels that he is left with no choice but to kill Ventus so Xehanort's scheme would fail. However, Xehanort expected the reaction and arranged for Terra to come to Ventus's aid. When Terra refuses to step aside, seeing that he has embraced his darkness, Eraqus attempts to kill Terra as well. After sending Ventus to the Destiny Islands, Terra uses his dark powers to mortally wound Eraqus. As both he and Terra show remorse for their actions against the other, more guilt-ridden as he attacked his own apprentices without a second thought, Eraqus is attacked from behind by Xehanort dealing the deathblow. Eraqus fades as he collapses into Terra's arms.

Eraqus's death, and the destruction of the Land of Departure, were Terra's sole motivation to confront Xehanort on the the Keyblade Graveyard. After taking Terra's body as his new vessel, amazed that Terra's heart is resisting his dominance, Xehanort learns that Eraqus's heart endured and entered Terra. Both Eraqus' position as protector of the Land of Departure, and his Keyblade, were inherited by Aqua.

After Master Xehanort is defeated by Sora, Donald and Goofy atop Scala ad Caelum, the remaining guardians of light join them atop the central cathedral. There, Terra confronts Xehanort, repeating the words Eraqus once told him during their training days. A shocked Xehanort could only watch as Eraqus' heart emerged from Terra's, materializing into an apparition of himself. Eraqus demands Xehanort to hand over the χ-blade, though the latter refuses, saying that it was too late; Eraqus however explained that it was for them, but not for the guardians of light. Though Xehanort remained persistent, Eraqus places his hand on Xehanort's shoulder, claiming that it was "checkmate".

Xehanort, having been reminded of his friendship with Eraqus, ultimately agrees to surrender and hands the χ-blade to Sora. While this happened, Eraqus shares a final moment with his three pupils, apologizing for the trauma he put them in before placing Terra in charge of the other two. As Xehanort began to die from his wounds, he is caught by Eraqus, and together the two ascend into the afterlife while taking on their childhood forms.

Although old and having rarely fought in his later days, Eraqus remains an accomplished Keyblade Master and magic user. His fighting prowess was enough in his older age that Terra is only able to defeat him using the power of darkness, being pushed back by his master's relentless assault. His melee style relies on many quick lunging attacks and is able to land many hits before the combo finisher. He can also warp quickly and unleash a devastating 3-hit combo. He is highly skillful in the manipulation of light, capable of coating himself in light and unleashing pillars and blades of light as well as firing shots of light energy, and is proficient enough in fire-related magic to create gigantic pillars of flame.

His capabilities in his prime are shown by the Armor of Eraqus, a data simulation of Eraqus in his Keyblade Armor, where all his sword attacks are considerably faster and stronger as well as his magical attacks, adding the ability to create and fire a rotating wheel of lasers. In addition, he also reveals he can skillfully use modified versions of Terra, Aqua and Ventus's attacks, having been the one who taught them in the first place.

Master Eraqus wields a rather basic Keyblade named "Master's Defender", which is grey in coloration. It has the appearance of an old fashioned skeleton key, and the teeth are shaped like an "E". Its Keychain is the Mark of Mastery symbol. He summons his Keyblade in a fashion similar to Terra, shrouded in a series of golden blocks.

Aqua uses the Master Keeper to seal the Land of Departure in turn transforming it into Castle Oblivion at the end of Birth By Sleep. In a trailer for Kingdom Hearts III as Sora is shown finding the Master's Defender on Destiny Islands. 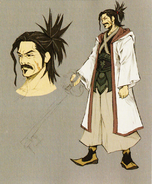