Normally, Mandrakes hide in the ground and attack from afar with their Leaf Cutters--and that's when they're still playing nice. If you get too close, they'll leap out of the ground and try to poison you, or else confuse you with the pollen they spew into the air as they charge.
Launching Plant
The Mandrake is an Unversed that is found in Kingdom Hearts Birth by Sleep and Kingdom Hearts Birth by Sleep Final Mix.

A Mandrake is a small Unversed with dark green skin, wide hips, and short legs. It has green and light green highlights on its body and lacks arms. It has a spherical, white head partially surrounded by a dark green "collar". Its eyes are red and set in a sorrowful expression and it has a red marking between them resembling a mouth. The Mandrake’s most prominent features are the three white, leaf-like blades on its head. These blades end in pale green, arrowhead tips that are vaguely reminiscent of the spikes on the Nobody symbol.

The Mandrake is based on a recurring monster in the Final Fantasy series, which is in turn based upon the mythical Mandragora.

In Kingdom Hearts Birth by Sleep Final Mix, the Mandrake receives a palette swap which gives them an orange body with yellow highlight, while its leaf-like blades are given a lighter shade of green.

At close range, a Mandrake is an easy opponent. While halfway buried, it shoots leaf blades which can be deflected back with Block for damage to either itself or other Unversed or dodged by jumping. Once approached, it leaps out of the ground and flies around dispelling poisonous pollen, so it's best to wait until it lands. Once on the ground, it attempts to ram players, causing confusion status if successful. Its tackles can be guarded, leaving it open to damage from Counter Hammer, Counter Rush, or Counter Blast.

However, while fighting other enemies at long range, it becomes rather annoying, firing its Leaf Cutter at you as you deal damage to other enemies and interrupting your combos and commands. For this reason, it is wise to eliminate these first where possible, or at least make them jump out of the ground, where they will lose access to their long range attack. 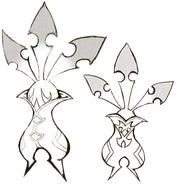