The Queen is gone, My service done. Adieu, O victorious one.

The Magic Mirror, containing a tortured soul known as the Spirit of the Magic Mirror within, is a mirror that gives The Queen advice and can answer any question, the most common one being "Magic mirror on the wall, who is the fairest one of all?".

The Spirit of the Magic Mirror is not inherently evil, rather it is an obedient servant who will do whatever it is told. It is shown to have little to no emotion, which is emphasized by the dull, monotonous tone in his voice.

Despite its loyalty to the Queen, it has refused her orders, an example being when it was ordered to destroy Terra. It refused, stating it could only answer questions, though it was later forced into doing so. The Spirit also has the unusual tendency to talk in rhymes.

The Spirit of the Magic Mirror is a white theatre mask, though the light often falls on it in such a way to give it a two-toned appearance. It has high-set eyebrows and its "eyes" are empty holes, similarly to its mouth. The back of the Spirit's "face" is black.

The actual mirror is surrounded by chiseled tiles representing the twelve signs of the western Zodiac.

The Magic Mirror first appears in Terra's scenario. The evil Queen asked the mirror who the fairest one of all was, and the mirror replied by telling her it was Snow White. The Queen later promised that Terra could use the mirror to find Master Xehanort if he could kill Snow White and bring her the princess's heart.

However, Terra was unable to do so, and told the Queen he never intended to do so. Terra then proceeds to tell her that unlike Snow White, she has much darkness in her heart. The Queen, insulted and outraged, commanded the mirror to destroy Terra, but it refused, saying it can only answer questions.

This being the last straw, the Queen throws a potion at the mirror, (She emits a red aura that has the same effects in the Japanese version of the game) causing it to transform into an Unversed and suck Terra in and fight him. However, it is defeated and releases Terra, who then demands the Queen to ask the mirror where Master Xehanort is. The mirror tells him, "Beyond both light and dark he dwells, where war was waged upon the fells.", indicating the Keyblade Master resided at the Keyblade Graveyard. Terra thanked the mirror for its cooperation before taking his leave.

The Magic Mirror later appears in Aqua's scenario. When Aqua looks for a cure for Snow White in the castle, the mirror, still possessed, drags her into the mirror for a fight, but she also manages to defeat it and is released. The mirror then disappears, stating that since the Queen is dead, its purpose has been fulfilled.

The Spirit of the Magic Mirror is an agile fighter, keeping its distance from opponents while shooting fireballs from its mouth. It also uses the mirror world to its advantage, creating replicas to confuse and attack opponents. It often slides horizontally across the ground while creating frame-by-frame reflections of its last few positions, inflicting damage to its opponents.

On December 14, 2017, Tamio Ōki, the Japanese voice actor of Magic Mirror, passed away at the age of 89 due to an unspecified illness. 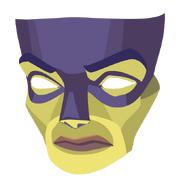