Kingdom Hearts Wiki
Register
Don't have an account?
Sign In
Advertisement
in: Article stubs, Section needed, Characters in χ Back Cover,
and 4 more

May my heart be my guiding key.

Luxu is a Keyblade Master and an apprentice of the Master of Masters. He was given the role to watch over events with his Keyblade in order to allow his Master to write the Book of Prophecies, as well as to hide a mysterious Black Box.

After passing his Keyblade down to one of the five new Union leaders, Luxu cast aside his original body, allowing his heart to sojourn itself in vessel after vessel for centuries, all while keeping a close eye on his Keyblade from a distance. When a prophesied "dark seeker" arose to begin another Keyblade War, Luxu stepped in and donned the mask of his ally in order to finish his role and eventually reclaim his Keyblade when the time was right.

Luxu appears to be the most reserved and quiet out of his fellow disciples and in stark contrast to his own enigmatic master. He is inquisitive, asking the Master of Masters what the Box holds, but his loyalty shines through and he keeps his promise of never opening it.

For all his loyalty to his master and the role given to him, Luxu still is deeply dedicated towards the light and shows great concern for the future of the world, to where he questions his master over his nonchalance and relaxed attitude in dealing with the darkness, believing that Keyblade wielders are duty-bound to protect the world from Darkness. Indeed, the Master of Masters has to reveal that he did have a plan to defeat the Darkness once and for all in order to get Luxu to comply, and when Luxu learns of the full extent of the Master's plans, he is clearly distraught and reluctant, even raging that the cost would be too many and opting to bitterly leave his master to do the role assigned for him once the conversation was finished.

The fact that following the Master of Masters plan can defeat the Darkness for good seemingly motivated Luxu into obeying all of his master's commands, to where he willingly stood by and watched as his comrades commenced the final battle of the first Keyblade War and transferred his heart into countless vessels over the span of centuries with the clear belief that despite the massive chaos and destruction, all of it would be fixed in the end. Due to Luxu's good-hearted nature, however, he wasn't able to entirely follow his master's orders and instead chose to possess the bodies of those that he was supposed to entrust the No Name Keyblade to so he can keep an eye out on the condition of the world and intervene if necessary, which the Master had already anticipated and tolerated, such action making him the true traitor among his apprentices.

It's indicated from the secret reports he wrote that the years have left Luxu with a great deal of emotional stress and wariness and he desperately wants to only finish the plan he and his master had prepared for so long while also strongly hoping to be reunited with his comrades. It is quite likely that the personality he showed as Xigbar was but a mere ruse and he may have been using sarcasm as a way to cope with his inner feelings.

Luxu is a boy that wears a black coat, completely obscuring his face from view.

His name is derived from the Latin word "luxuria", or Lust, which is symbolized by a scorpion in the Ancrene Wisse.

Luxu was one of six apprentices to the enigmatic Master of Masters, the writer of the Book of Prophecies, a tome that contained knowledge of the events to come. One day, Luxu was summoned by his Master to the Foretellers' meeting chamber, where the Master bequeathed to him the Gazing Eye Keyblade, at the time he referred to as "No Name". The Master reveals to Luxu that the eye within the Keyblade was in fact his, telling his apprentice that his role was to pass down the Keyblade to his future apprentice and so forth. This prompts Luxu to realize that the Book of Prophecies was a result of future foresight from the process of passing the Keyblade and the eye within it over the ages, to which the Master congratulates the bewildered boy for accomplishing.

Continuing, the Master explains that Luxu wouldn't receive a copy of the Book of Prophecies in order to prevent any temporal paradoxes from occurring and that he was alone from here on out. Luxu questions if he would really have to go alone, asking of the other Foretellers, though the Master assures that it was "minor details". The Master then reveals a mysterious Black Box, telling Luxu to stay out of sight with it, all while observing over the others with his Keyblade and his own eyes. Luxu asks what was in the box, though the Master tells him it was a secret, and that he mustn't even open it. This causes Luxu to become even more curious, so the Master decides to indulge the boy once he promised not to tell anyone nor ever open it. Once Luxu agreed, the Master whispers its contents to him. Shocked upon hearing what was in it, Luxu asks why, though the Master tells him he will see.

With his path set ahead of him, Luxu trudged through a barren desert with both his Keyblade and the Black Box in tow. Observing the weapon, he recites his Master's mantra: "May my heart be my guiding key". He disappeared shortly before the Master of Masters did.

Luxu is mentioned only a few times by Chirithy and the Player's Foreteller. Gula informs Skuld and the Player that Luxu is the only one who might be able to find the Master, and that Ava is searching for him. Ava tracks down Luxu to the outskirts of Daybreak Town. Luxu explains his mission, and claims that it is impossible to avoid the Keyblade War, and that he will set off after this world ends. Assuming that the Master has intentions to destroy this world, Ava accuses him of being the traitor responsible for sowing distrust between the unions, and he brandishes his Keyblade.

After duelling with Ava, he proceeds to tell Ava the truth about the Lost Page in secret, while claiming the Keyblade War was all but inevitable; any attempt to stop it was futile. When told by Luxu that the Master favored the events to come as opposed to the greater good of the world, Ava accuses Luxu to be taking advantage of the Master's intentions for himself. Drawing her Keyblade, Ava attacks Luxu, the resulting clash of their Keyblades sends a shockwave across Daybreak Town, ringing the bells and signifying the start of the Keyblade War.

Curious to know if the Master is going to tell Luxu about the Black Box, he asks him to tell it directly to him now but instead gives him a hint about what will happen. The Master says to Luxu that when Darkness strikes at dawn and the lifeboat departs, the world would have fulfilled its purpose. He orders Luxu to see it through until the end, and take a new corridor to a new world quickly as possible.

Luxu realizes the world is going to end, but the Master reminds him that there isn't a way to win against the Darkness, and is instead using their time to gather all of the Keyblade wielders and pass them on to the next generation. The Master further states that the world exists to take care of the Dandelions so they can be transferred to the future, which will be able to fully stop the darkness as part of their plan.

As the Keyblade War reached its conclusion, Luxu watched in silence from afar with the Black Box at his side as he used the Gazing Eye to relay the events to the Master of Masters.

Having seen the Keyblade War unfold, Luxu continued to carry out the role the Master of Masters had given him. He eventually bequeathed the Gazing Eye to one of the five new Union leaders, and watched as they were sent into another worldline. This however, left him without a Keyblade of his own, and in order to fulfil his final task, Luxu had to cast his own body aside and use different vessels in order to survive.

After many lives, watching as his Keyblade was successfully passed down from master to apprentice, Luxu decided to intervene as the Gazing Eye was bequeathed to Xehanort, a Keyblade Master fascinated with both the darkness and the Keyblade War. With a new body and identity - Braig - he assumed the role of a fool who desired the power of the Keyblade in order to get close to Xehanort.

Luxu is responsible for writing the eleventh, twelfth, and thirteenth Secret Reports, detailing his mission after witnessing the Keyblade War and the countless lives he had lived over the years before obtaining his final vessel as the ally of the scapegoat who would re-enact another Keyblade War, an act that would allow the other Foretellers and the Master of Masters to return.

Though not much is known about his level of strength, it is implied to be on par with that of the other Foretellers. He is shown to be able to at least fight with a Keyblade and has some strength as well, being able to move heavy objects like the box.

Luxu is powerful enough to not need a Keyblade to transfer his heart to other vessels; being able to dominate the original vessel's heart, unlike Xehanort, whose failed attempt created Terra-Xehanort.

Luxu is given a Keyblade known as the Gazing Eye by the Master of Masters. The weapon has a spiky, black guard resembling demonic wings, a horned, demonic head just above the handle, two barbed shafts, and teeth resembling a battle axe split into three almost claw-like protrusions. Its shaft and head are adorned with several twisting, silver patterns. It also contains two demonic blue eyes, with one on the Keychain and the other one on the head, which in fact is his Master's "gazing eye". 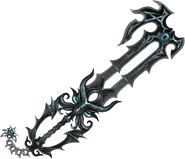 The Gazing Eye, the Keyblade bequeathed to him by the Master of Masters.