A hideous, gloopy giant robot that mucked about in Monsters, Incorperated. The fact that it listened to Randall is enough to tell you it wasn't very nice.

It shape-shifted and sprouted a dark army of arms whose upper portions lay flat to the ground, while the lower parts stood straight up, and each dropping hand had a circular thing on its back, but in the end Sora and the gang reduced it to a lifeless pile of machinery. Well, actually, all that was left of it was a bunch of scream cans lying around on the floor.
The Lump of Horror is an Unversed( organic robot)) found in Kingdom Hearts III, fought exclusively as the final boss of Monstropolis.

Design: It is mainly a giant blob of black tar with machine parts on top of the head and scream cans sticking out of its body(mostly its back, that is, opposite its face), with two pale glowing red eyes expressing sadness, and underneath the eyes it has a large hole the same colour for a mouth. It's winged form is a tall column of tar, only showing more of its face and has large wings.

This robot usually stays tucked up in a large, complicated sealed tank with the Vanites insignia on its top. It fails to obey Randall 's command to exit its tank when he calls it, so either Randall didn't build it, or the Man In The Black Cloak rigged it to obey no one but him

Strategy: One of its attacks is when it will become enraged and will charge Sora and his friends, afterwards it will release one or three balls of fire. Another attack shows the Lump of Horror sink slightly into the ground and extending its hands, creating more hands that will swipe Sora. The last attack it will sink completely into the ground and come back out in its winged form; where it will flap its wings and tries to push Sora away from it, more hands help during this mode.

When Sora breaks the Lump of Horror, its tarry residue vanishes almost immediately, leaving only the scream cans lying around on the floor. 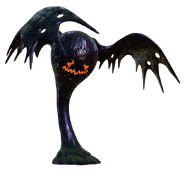 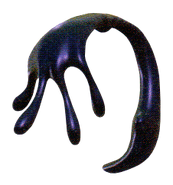 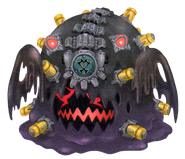