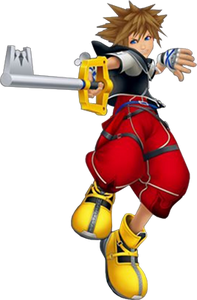 Limit Form (リミットフォーム, Rimitto Fōmu?) is a Drive Form which appears in Kingdom Hearts II Final Mix. It uses neither of your team members, and consumes four of Sora's Drive Bars. It represents Sora's past[1], and is obtained along with the Oathkeeper at Twilight Town, after Sora learns about Kairi's abduction.

Limit Form is gained upon visiting Twilight Town the second time. Limit Form allows Sora to use abilities from Kingdom Hearts and Kingdom Hearts Final Mix, such as Dodge Roll and Zantetsuken. It is symbolized by a red crown (similar in appearance to Sora's necklace). Similar to Master Form, it consumes four Drive Bars and it can also be used by Sora without giving up one of his partners.

In this form, Sora's clothes change into the same colors and style of the clothes he wore in Kingdom Hearts and Kingdom Hearts: Chain of Memories. There are Crown symbols on the end of his pant legs. This is the only Drive Form where Sora has no auras of lights surrounding him, although whenever he enters a new area, his torso glows red for a short time and a few specks of light fall off of him.

As this form is exclusive to Kingdom Hearts II Final Mix, it is recommended to make use of all the additions that are exclusive to Kingdom Hearts II Final Mix to level up Limit Form: the best places to level up are in the Cavern of Remembrance, where there is an abundance of Heartless, and in the Treasure Room in Agrabah, where Mushroom No. 5 can be found. The latter is recommended as the player has the benefit of a nearby Save Point, and can always use it to return to the World Map if Sora's Drive Gauge is low.

Yet another way, and probably the best, would be to take advantage of the fact that you only have to be in battle to use limits; you don't need to have enemies to use them on. First, equip as many Form Boosts as possible (including the Oathkeeper), and go to an area like Fragment Crossing where there are many low level heartless with which to engage in battle. Use the Sonic blade limit, which takes the least amount of MP to perform, over and over until you have no MP left. Then, return to the save point you used to enter the world, open the save menu and close it again to instantly recharge your MP. Then return to Fragment Crossing, engage in battle again, and repeat the process until your form gauge is about to run out, when you would then leave the world and come back to return your drive gauge to max. Repeat this process as much as you want, or until you've maxed out your Limit Form level.