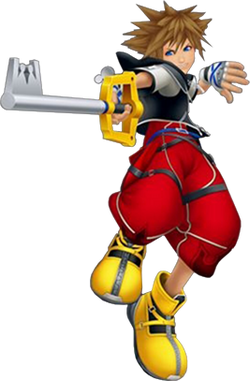 Limit Form (リミットフォーム, Rimitto Fōmu?) is a Drive Form which appears in Kingdom Hearts II Final Mix. It uses neither of Sora's party members, and consumes four Drive Points. It represents Sora's past,[1] and is obtained along with the Oathkeeper Keyblade at Twilight Town, after Sora learns about Kairi's abduction and seals the world's Keyhole.

Limit Form is gained upon visiting Twilight Town the second time. Limit Form allows Sora to use abilities from Kingdom Hearts and Kingdom Hearts Final Mix, such as Dodge Roll and Zantetsuken. It is symbolized by a red crown (similar in appearance to Sora's necklace). Similar to Master Form, it consumes four Drive Bars and is also the only Form that can be used by Sora without giving up any of his partners.

In this form, Sora's clothes change into the same colors and style of the clothes he wore in Kingdom Hearts and Kingdom Hearts: Chain of Memories. There are Crown symbols on the end of his pant legs. This is the only Drive Form where Sora has no particle effects, such as light wisps or electricity, surrounding him, although whenever he enters a new area, his torso glows red for a short time and a few specks of light fall off of him. While his fighting stance remains the same as his base form, as he is in a Drive Form, Sora does not exit his fighting stance.

As this form is exclusive to Kingdom Hearts II Final Mix, it is recommended that the player makes use of all the additions that are exclusive to KHIIFM to level up Limit Form: the best places to level up are in the Cavern of Remembrance, where there is an abundance of Heartless, and in the Treasure Room in Agrabah, where Mushroom No. 5 can be found. The latter is recommended as the player has the benefit of a nearby Save Point, and can always use it to return to the World Map if Sora's Drive Gauge is low.

Another opportune method to level up Limit Form is during The Battle of 1000 Heartless. At this point in the game, Sora's Drive Forms may level of to LV6. The player can level up 2 or even 3 levels, if Limit Form is used constantly and plenty of Ethers are on hand. Alternatively, utilizing MP Rage and the Hidden Dragon Keyblade to restore MP is equally effective; If the player allows Sora to take damage, then MP will be replenished as a result. The amount of damage required would allow him to restore his MP Gauge to full before his HP hits zero, and Limits will restore the lost HP just as well. This means that the player need not even use items to restore MP. This alternate method is more effective at higher difficulty levels, making the process less tedious.

Likely the most optimal way to level up Limit Form would be to take advantage of the fact that Limits do not actually require targets, only for Sora to be in battle. First, Sora must have equipped as many Form Boosts as possible (including the Oathkeeper). The location of choice is the Treasure Room in Agrabah, where Mushroom No. 5 is open for dueling. As the Heartless will not move or attack Sora within the sizeable room, he can perform Limits at his leisure without worrying about defeating or even damaging the resting enemy after the duel starts. The player must then move over to the entrance while keeping the target reticle off of No. 5, and proceed to use Sonic Blade (which at maximum MP, can be used three times as opposed to the other Limits) over and over. As the Save Point is right outside the room, Sora is able to restore his MP and enter battle as he pleases.