Armor covers every inch of these large Heartless, allowing them to deflect blows from every direction. Instead, aim for the head and knock them down, rendering them vulnerable to further attack. Use Fire magic to keep them down longer.
Clay Armor
Solid Armor
Land Armor
Large Body
Fat Bandit
Large Snowman
Huge Snowman
Ringmaster
Helmed Body

A Large Armor has a very large, round body that is almost entirely covered in armor. Its head is very small, pitch-black, and has a jagged mouth, glowing yellow eyes, and short, gold horns. It wears gold boots and large, gold and red-violet gauntlets. The armor around its neck is gold, its breastplate is silver and light grey, and the armor on its lower body is black with a grey, zig-zagging line around its abdomen. Its Heartless emblem is in the middle of its belly, just below its breastplate.

Lock-On to the head, and attack it with physical attacks and Fire magic to quickly defeat the Heartless. When dealt enough damage, it will fall and flail on the ground, giving the player an opportunity to attack. Right after that, it will retaliate by getting up and swinging its arms in a circle, which is more powerful than any other of its attacks; it can be avoided by breaking off an attack and distancing yourself from the Heartless. 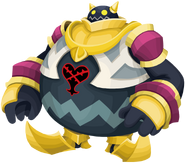