View source
watch 03:01
Wiki Targeted (Games)
Do you like this video?
Play Sound
Article incomplete
This article is incomplete. You can help the Kingdom Hearts Wiki by adding Accurate information on Heartless, villains, and allies.

N/A
Kingdom Hearts V CAST is a Kingdom Hearts game that was developed exclusively for V Cast, Verizon Wireless's broadband service. It was released on October 1, 2004 in Japan and on February 4, 2005 in the United States as one of the launch games for the V Cast services. It was developed by Superscape and published by Disney Interactive Media Group (formerly known as Walt Disney Internet Group), making this installment of the series to be the first to be made by a company other than Jupiter and Square Enix.

Sora, Donald, Goofy, and Jiminy Cricket are traveling across the universe in the Gummi Ship when they decide to go to sleep. They put the Gummi Ship on autopilot, and in their sleep, a strange creature creeps undetected into the vessel and subsumes Sora's dreams. When he wakes up, he is shipwrecked on a deserted island called Swordman Island, and Donald and Goofy are nowhere to be found. His goal is to find his friends and leave the island, but even after searching every nook and cranny of the island, Sora cannot find Donald and Goofy, so he builds a raft and leaves the island to find them.

The first is that it could have taken place in or during Kingdom Hearts because Sora has already met Donald, Goofy, and Jiminy Cricket and they are traveling in the Gummi ship. It could have happened when they were traveling between different worlds, namely Hollow Bastion and the worlds before it because of the periodic cutscenes showing Maleficent watching Sora through a magical cauldron with green, misty water. These cutscenes suggest that Maleficent is attempting to stall Sora in a dream-like state as he is reaching her lair.

Kingdom Hearts V CAST brings back the gameplay elements featured in the original Kingdom Hearts, though it was modified for compatibility with mobile phones. Sora moves similar to a tank, with one button on the control pad moving him forward, another moving him backwards, and two more turning him left or right. Even with these new controls, Sora can still perform a number of moves aside from running and jumping. He can climb trees and ladders, grasp the edges of platforms and pull himself up, lift and throw objects, and use the Keyblade to slide down zip lines.

Sora can still use the Keyblade and also magic, the first spell he learns being Blizzard, to fight like in Kingdom Hearts. Munny and Experience are still earned by defeating Heartless. As opposed to Kingdom Hearts, however, Kingdom Hearts V CAST introduced "assistant characters," such as the Caterpillar and Swordman Parrot, as opposed to guest party members.

The Heartless have been proven to exist in Kingdom Hearts V CAST, though screenshots are only available of Sora fighting Shadows and Bandits. The most frequently occurring Heartless are Shadows. Sora also fights a shadow version of himself, which is the creature that Maleficent creates.

The Swordman Island, also called Swashbuckler's Island, is a world and the first 'chapter' in Kingdom Hearts V CAST. Sora wakes up on the island after the Gummi Ship is shipwrecked by a strange creature, and Donald and Goofy are no where to be found. In place of your friends, there is, however, a parrot who helps you around the island. He says it would be a good idea to look around, so Sora explores the island. After searching he can still not find Donald or Goofy, so the parrot says it would be wise to gather parts to make a raft and leave the island.

Doing this requires you to explore the beaches, coves, and crags to get parts, much like in the beginning of Destiny Islands in Kingdom Hearts. There is a kite puzzle that lifts you into a watchtower, a lava-filled chamber, and a mission where you must uncover four altar gems on a strange altar among the high rocks. After retrieving the four gems at the altar and finding all the parts to assemble the raft, Sora leaves the island and the chapter ends.

In Wonderland, you must help the Caterpillar gather potions. You find these by traveling through hedges, which are guarded by card soldiers.

In Agrabah, you must help the merchant gather gems, after which you will fight Jafar in his Cobra form.

Maleficent's Fortress is the final level in Kingdom Hearts V CAST. This is where Sora battles Maleficent in the final chapter. It has the strongest Heartless in the entire game. You also get to fight Maleficent's minions. 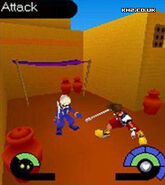 Sora fighting a Bandit in Agrabah 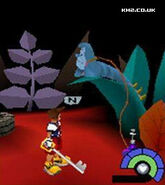 Sora and the Caterpillar in Wonderland

Maleficent in the game