Like Kingdom Hearts χ, Kingdom Hearts Unchained χ is free to play, but it contains in-app purchases. The game was released in Japan on September 3, 2015 while it came out in North America April 7, 2016 and Europe and Australia in June 16, 2016.

Looks like you're getting the hang of that thing. Yep, you kinda look the part too! It's time that you learn how this all came to be. Before he disappeared, the one who made me bestowed names on his six apprentices, and passed down the Book of Prophecies to five who came to be known as the Foretellers. The five read the manuscript, and were shocked by the final entry. "The fated land will be the battleground for a great war. Light will see defeat and expire, while darkness prevails evermore." They decided to draw on the powers of the book to prevent that from happening. The Medals you're using are one of those powers. They harness unimaginable forces from the future to protect light and keep the world safe from the inevitable darkness. As for the foretellers, you should know that they share the same goal, but they don't follow the same path. Don't lose sight of yours, okay? 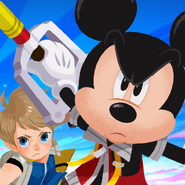 The first icon for the Unchained χ application.

Promotional artwork of Ephemera, Skuld and Chirithy by Tetsuya Nomura. 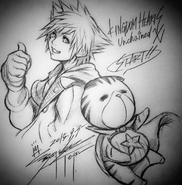 Promotional artwork of Sora and Chirithy by Tetsuya Nomura.

Promotional artwork of Ephemera and Chirithy by Tetsuya Nomura . 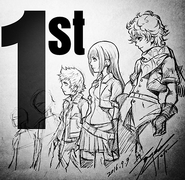