Both games have remastered HD graphics and Trophy support and the cutscenes from 358/2 Days have been remade in HD. It was revealed in September 2012, and it launched in Japan on March 14, 2013 and North America, Europe, and Australia in September 2013. The game marks the first time Kingdom Hearts Final Mix is available outside of Japan, and the first time Kingdom Hearts Re:Chain of Memories is available in Europe and Australia. It is followed by Kingdom Hearts HD 2.5 ReMIX.

It was re-released with Kingdom Hearts HD 2.5 ReMIX in March 2017 for the PlayStation 4.

Pre-Ordering the game came with a Limited Edition Artbook at launch. The Artbook wasn't a separate book from the actual game box, and included the disc at the back of the book.  The Artbook contains early sketches, character renders, and final pieces of artwork from Tetsuya Nomura.[5] On July 15, another bonus was announced via the Kingdom Hearts Facebook page.

By preordering the game, American consumers would automatically receive an exclusive dynamic theme for the PlayStation 3 as it was gifted by the NA division of Square Enix (neither European, Asian, or Australian customers received the dynamic theme).

A "secret" message from Tetsuya Nomura was also included as a foreword in the book.  It read:

Over 10 years have passed since we released the first KINGDOM HEARTS game.  My only regret was never releasing KINGDOM HEARTS FINAL MIX overseas, so I am very pleased to now give fans everywhere a chance to play it, this time in its best format - full High-Definition.

Revisiting the first game, I don't think it feels like a ten-year-old game, despite some unrefined elements.  Everything was a new experience for me back then.  It was extremely challenging to create a completely new game system and series.  However, I think KINGDOM HEARTS FINAL MIX still feels like a new game because the passion of our creative efforts are still felt in the game itself to this day. 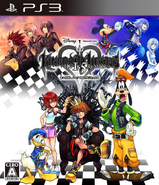 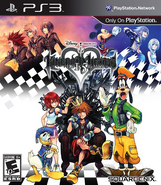