ESRB: E10+
Kingdom Hearts Dark Road is a Kingdom Hearts game for the iOS, Android, and Fire OS, which focuses on Xehanort and Eraqus' time in Scala ad Caelum where he is tasked by Master Odin to search for the Lost Masters while Xehanort questions his alignment of wanting to side with the darkness. It takes place centuries after Kingdom Hearts Union χ.

The game was announced on January 23, 2020 under the working title "Project Xehanort" while a Guess the Name campaign was being held on the official Twitter.[1] The official name was revealed on January 31, 2020.[2] 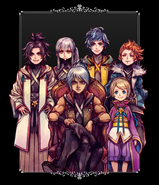