View source
watch 02:23
Wiki Targeted (Games)
Do you like this video?
Play Sound

New to 0.2 is the introduction of Situation Commands, a successor to the Reaction Command system that incorporates elements of the Command Gauge featured in Birth by Sleep for versatile, dynamic gameplay.

As the Keyblade War concludes and the hearts of the fallen ascend to Kingdom Hearts, Luxu watches from afar in silence with the Black Box at his side as he uses the Gazing Eye to relay the events to the Master of Masters.

At the Mysterious Tower not long after Master Xehanort's resurrection, Riku, Kairi, and King Mickey are having an audience with Master Yen Sid. Yen Sid explains that in order to confront Xehanort, they will need to gather the Seven Lights, among those which include the three Keyblade Wielders who befell a terrible fate over a decade ago. At Yen Sid's request, Mickey tells Riku and Kairi of the time he came across Aqua in the Realm of Darkness.

The story begins where Kingdom Hearts: Birth by Sleep Final Mix's Secret Episode ended, with Aqua discovering the Castle of Dreams within the Realm of Darkness. Sensing something suspicious, Aqua makes haste towards the castle, fending off repeated Heartless attacks along the way. However, upon approaching the castle grounds, the clock on the castle's tower advances, causing the land to crumble.

Aqua enters the nearby town to find five Gears that will turn back the clock and restore the grounds. As she locates the Gears and activates them, Aqua experiences flashbacks to her time in the Realm of Light. After reviving the path to the castle, Aqua makes her way forward, but is accosted by a large swarm of Shadows conglomerating into a Demon Tower, which she successfully repels. Entering the castle, she spots what appears to be Terra. When she approaches him, though, the apparition disappears into light. Aqua solemnly recalls her past with her friends before proceeding.

Moving beyond the castle, Aqua next finds herself in the remains of Dwarf Woodlands, with only a single casket before her. Approaching the casket, she sees Ventus within, and desperately calls out to him. However, as with Terra, Ventus too vanishes, leaving Aqua alone. As Aqua searches for her resolve, she notices a large mirror floating near her, and reaches out to it. As she does. her apparent reflection suddenly grabs her arm and pulls her into the mirror, taking her to The World Within. Discovering that the path back is blocked, Aqua approaches the central chamber before being surrounded by three shadowy mirrors that appear to taunt her before flying off into the central chamber.

Aqua, realizing that the shadowy mirrors must be some sort of clue, begins to investigate the mirrors, while being seemingly haunted by her own self-doubt. Upon finding the first mirror, Aqua hesitantly approaches it and stares at her own reflection. In moments, the reflection suddenly comes to life, stepping out of the mirror and summoning a Keyblade while taunting her. It then engages Aqua in a fight, in which Aqua successfully dispels the phantom. Aqua proceeds to seek out the other two Phantom Aquas and defeat them, then returns to the mirror from which she came. She reflects on what the Phantoms have been telling her, painfully admitting that they are the manifestations of her own doubt and self-loathing that are trying to kill her, and that she is starting to let the darkness into her heart. Regardless, Aqua accesses the mirror and pushes on.

Exiting the mirror, Aqua ends up in the remains of the Enchanted Dominion, where she once again spots the apparitions of Terra and Ventus. Declaring her intent to find them, she chases the illusions across the forest, encountering numerous Darkside in the process. Upon exiting the forest, Aqua finds herself in a vast landscape haunted by countless Darkside, all of which appear to be feeding a large orb of darkness in the sky. Aqua takes it upon herself to vanquish the Darkside protecting the orb, eliminating it and causing the orb to dissipate feebly and escape.

Aqua finally manages to catch up to the illusions of Terra and Ventus; calling out to them, she is surprised when Terra responds to her. Terra reveals that he is unable to see anything within the Realm of Darkness, and that both he and Ventus are illusions conjured by Aqua. He explains to Aqua that he is no longer in control of his body, but while Aqua reflects on Ven's comatose state, Xehanort suddenly takes over and nearly tricks Aqua into revealing Ven's hiding place in Castle Oblivion. Before she can do so, Terra reappears and grapples Terra-Xehanort from behind, restricting him and summoning binding chains. From behind Aqua and Ven, a dark portal manifests and a Darkside's hands grab Aqua and Ven, strangling them while dragging them through the portal. Aqua blacks out as she watches Terra confront Terra-Xehanort.

Aqua is later seen drifting into the darkness. As she lets go of her Wayfinder, Mickey appears and grabs onto her, putting her Wayfinder back into her hand. The two of them find solid ground, where Mickey explains that it has been ten years since they last met, and that he entered the Realm of Darkness to seek the Keyblade of the dark realm so that he and Sora can seal Kingdom Hearts. He managed to find Aqua through her Wayfinder, which emitted a "warm, familiar light". After they fight back another Demon Tower, Mickey and Aqua decide to proceed together.

Travelling further, the two of them manage to arrive at Destiny Islands, having been absorbed by the End of the World. Aqua recognizes the islands as the place where she first met Sora and Riku, and where Terra bestowed the power of the Keyblade to the latter. Mickey deduces that this must mean that they are close to the location of the dark realm's Keyblade, and thus approach the Secret Place. When they are about to enter, however, the Demon Tower, now in the form of the Demon Tide, returns and attacks, forcing Aqua and Mickey to defeat it for seemingly good. Having vanquished it, Aqua and Mickey enter the Secret Place and find the wooden door within; opening it, the two find a glowing Kingdom Key D inside, which Mickey claims. Moments later, Destiny Islands vanishes, leaving the two in the Realm of Darkness.

From the distance, Mickey spots the door to Kingdom Hearts, and points out to Aqua that it looks different than what she's used to. Upon approach, Mickey also notices Riku in the Realm of Darkness attempting to close the door. Before he can get close, the Demon Tide surprises Mickey and damages him, stripping him of his clothes. Aqua decides to buy time for Mickey by fighting back, but the Demon Tide takes hold of her and drags her back to Destiny Islands, the door behind them sealing shut. Mickey goes to help Riku and Sora seal Kingdom Hearts while Aqua, finding her will to live, finishes the battle against the Demon Tide.

Aqua is later seen lying on the seaside shore, gazing up into the sky, which turns to night. As she stares into the stars, she notices droplets of light raining down, indicating that Kingdom Hearts has been successfully sealed and that Destiny Islands is being restored. Unable to leave the Realm of Darkness, Aqua falls off the disintegrating shore and drifts into the darkness once more.

In a subsequent cutscene, Aqua approaches the Dark Margin, where Ansem the Wise sits in wait.

Mickey finishes his retelling of his tale, at which point Riku lashes out at Mickey for not telling him that Aqua was there at the time and that she gave herself up to save him. Yen Sid intervenes and explains that neither Mickey nor Riku had the power to save Aqua, and that he had personally forbade Mickey from telling them, lest Riku, or in higher probability Sora, stage a potentially suicidal rescue attempt. However, as Riku had recently become a Keyblade Master, they now possess the means to rescue Aqua. Mickey invites Riku to assist in his rescue mission, to which he agrees. Kairi, wishing to help, is told by Yen Sid that she will need to train as a Keyblade Master alongside Lea, much to her surprise. Yen Sid bestows upon Mickey and Riku a new set of clothes that will protect them from the darkness before they leave.

Sora later returns with Donald and Goofy, having left at the end of 3D to take care of business, which he refuses to divulge to his friends. When he enters the Mysterious Tower, however, he finds that everyone already left, much to his dismay. Yen Sid calls the trio to attention, and explains that while Sora failed his Mark of Mastery Exam and lost most of his powers in the process, he is still the most important link to defeating Xehanort. He then states that Sora must obtain the power of waking, which he failed to master in the Sleeping Worlds, and directs him to a certain hero who once lost his power and reclaimed it. He also tasks Donald and Goofy with protecting Sora, to which they happily agree.

The scene later cuts to the trio in the Gummi Ship, with Sora lost as to how to get to Olympus Coliseum. As the result of Kingdom Hearts II, many of the gateways that they had previously unlocked had shut, preventing them from freely travelling across worlds. As Sora ponders a way to get there, Goofy recites the phrase "Let your heart be your guiding key", which he claims Yen Sid said to them before they left on important missions. Sora, now inspired, summons his Keyblade and points it into space, which subsequently opens a path before them. The three of them proceed to fly through the portal, disappearing. 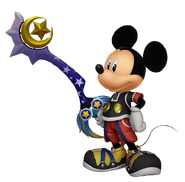 Aqua in the Realm of Darkness.