Sora, Donald and Goofy walk down a long path that seemingly goes nowhere. They see Pluto and start to follow him. He leads them to a crossroads. While deciding which path to take, a mysterious man in a black cloak approaches Sora and speaks to him, but at that moment his words are incomprehensible. The path becomes one and it leads them to Castle Oblivion. The cloaked man appears as they enter the castle and gives them a card.

They use the card to proceed through the castle. The first world they go to is Traverse Town, where they discover that Leon, Aerith, Yuffie, and Cid have forgotten all about them, yet they strangely remember Sora's, Donald's, and Goofy's names, where Yuffie comments, "You're not in my memory, but my heart remembers you." After Leon gives Sora a tutorial on fighting and gives Sora a Simba summon card, they leave Traverse Town.

The man appears once more after they arrive on the next floor. Another cloaked man appears and introduces himself as Axel. Sora battles him, and when Axel is defeated, he gives him more cards, disappearing soon after. Sora, Donald, and Goofy go through each floor, experiencing their memories, all of which are somehow distorted, each in a different way. They start to lose their memories. A Nobody named Naminé begins to replace memories of Kairi with fake ones of herself. It turns out she is good and is manipulating his memories under the orders of the head of the castle, Marluxia. This escalates to a final battle in the end, for Sora's life, and Naminé's freedom.

Meanwhile, Riku awakens down in the castle, and as he goes up the basement levels of Castle Oblivion, he must take control of the inner darkness inside of him, dealing with Ansem, the Riku Replica, and three members of Organization XIII; Vexen, Lexaeus, and Zexion, along the way.

Kingdom Hearts Chain of Memories follows a totally new battle system as well as gameplay. The battle system now revolves around Sora's memories, represented as cards. Using these cards is the only way to attack. Map Cards are used to create rooms on each floor of the castle. What appears in each room depends on what card was used to generate that room. To obtain a map card you must defeat Heartless. Some map cards can only be obtained after getting further into the story for each of the different worlds.

The "Card System" is a new battle system that was introduced to the Kingdom Hearts series with Chain of Memories. Attacks are represented by cards with different values and abilities. The total number of cards a deck can contain is determined by a player's Card Points (CP). Each card has an individual CP value, which is based on how powerful the card is, and the total CP of all the cards in a deck cannot be higher than a player's, or a maximum of 99 cards. Players can raise their CP by leveling up Sora, thus being able to hold more cards. For example, if a player has 5 different cards with CP of 15, 20, 30, 25, and 15, then they would have to have a total CP would then be 105 or greater to put all five cards in the deck. If a player runs out of cards in the deck, they have to reload, leaving you vunerable to an attack.

There are three types of cards that are different from the other cards in battle:

Each card has a number from 0 to 9. This is known as Card Value. When a card is played against the enemy's card, the card with the lower value "Breaks" and is discarded. This leaves enemies vulnerable for a few seconds. Cards with a value of 0 can break any attack, but can be broken by any card if played too early.

A special ability that can be either learned from leveling up, or obtaining them from boss fights or chests. Some sleight examples are: Sonic Blade, Strike Raid, and Ars Arcanum.

Some of these sleights did not appear in Kingdom Hearts, such as Fire (Blizzard, Thunder) Raid, Homing Fira (Blizzara, Thundara), etc., as well as some friend sleights, such as Blazing Donald. Further sleights were added to Kingdom Hearts Re:Chain of Memories as well.

Cards can be combined into sets of three, not only creating a higher value combo that is more difficult to break, but is also essential in activating sleights. The cost of combining cards is that the first card used in the combo cannot be reloaded when the deck is reloaded, although certain items, such as Elixir and Megalixir, can reload any unreloadable cards.

Sora can use any available card to create up to three decks as long as there is at least one Attack card in his deck and you don't exceed his Card Point (CP) limit.

During Level Ups Sora can increase his CP, in addition to obtaining more HP and new sleights at certain times. Other than using Attack, Magic/Summon, and Items cards, Sora can also use Premium cards, which are special Attack or Magic cards. These cards do not require as much CP to equip although they can become unreloadable cards when used, with the minor exception as the second or third card in a combo.

Other than using Moogle shops to obtain additional cards, Sora can also collect cards by smashing or jumping on objects, occasionally making a random card appear. There are certain cases where Sora has to earn the card through the storyline first before it becomes available in a Moogle Shop.

There are cards throughout the game that are used to open doors to different rooms once entering a certain world. They are in the same colors as the Magic, Item, and Attack Cards, except they are usually only gained at the end of a battle, and they generally only are used to open doors within worlds. They may have names such as Looming Darkness, Tranquil Darkness, Feeble Darkness, Calm Bounty, Martial Waking, and even special room cards called Key to Rewards and many more. They all do contain a special effect when used. They are needed to open all doors throughout the floors of Castle Oblivion.

After completing the game as Sora, a new challenge arises. Reverse/Rebirth mode follows Riku as he climbs the basements of Castle Oblivion. Riku gets a World Card for each of the worlds Sora goes through except 100 Acre Wood. Riku's deck cannot be changed, however, it changes automatically as time goes on. Riku does not need as much time to reload his deck. Certain enemy cards are only available to Riku, and then unlocked for Sora after completing the game with Riku. Riku can only keep the enemy cards that are based off of the bosses after winning them during battle, the others are available in one world only.

Instead of leveling up HP, CP or sleights, when Riku levels up, he can increase HP, AP (Attack Power), or DP (Dark Points). After Ansem, Seeker of Darkness (who is still alive) tampers with the darkness in Riku's heart, Riku can use his dark powers during battle. These powers are triggered by taking damage or breaking his opponent's cards; when the Dark Points reach 30 or more, Riku will automatically go into Dark Mode.

In Dark Mode, Riku can use 3 powerful sleights exclusive to his Dark Mode: Dark Aura, Dark Firaga, and Dark Break (these attacks were used by the Riku Replica in Sora's story.) How long Dark Mode lasts depends on how much DP he has, and taking damage as well as being card broken reduces the amount of DP Riku has left in a given battle. When the DP counter reaches zero, Riku turns back into his original form. Dark mode can be achieved any number of times in a given battle.

Riku does not have access to any of the friend cards that Sora had. Instead, he has King Mickey as his only friend card. Using Mickey heals Riku, reloads the deck, and stuns enemies for a few seconds. Using more Mickey cards at once increases the power of this attack. Because of his inability of using magic cards, Riku cannot heal as easily during battle, limiting it to the Oogie Boogie and Search Ghost Enemy cards in addition to Mickey Mouse. Bosses exclusive to Riku's story are: Zexion (Re:CoM Only), Lexaeus, and Ansem, Seeker of Darkness.

Kingdom Hearts Re:Chain of Memories is a PlayStation 2 remake released in a package along with Kingdom Hearts II Final Mix. The game features 3-D graphics and voice-acting, along with all-new cards and cutscenes. It was released as a standalone game in North America on 2 December 2008. A PAL version was not released until the release of Kingdom Hearts HD 1.5 ReMIX.

The game is included alongside the original Kingdom Hearts in Kingdom Hearts HD 1.5 ReMIX for PlayStation 3. Both games have been remastered in high definition and include Trophy support. 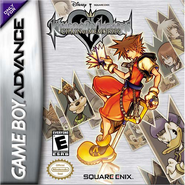