The Keyblade Graveyard is made up of unending, rocky badlands, scarred by the battles of the Keyblade War. Early on, Terra and Ventus investigate the world at the Badlands (荒野, Areno?, lit. "Wasteland"), where they run into Master Xehanort and Vanitas, respectively. Later, the Vanitas Remnant and Lingering Will appear here, where they challenge intruders to battle.

Each of the heroes eventually enter the true battlegrounds of the world at the Seat of War, a small outcropping of rock overlooking the shattered vista below. It leads into the Twister Trench, where Vanitas's raging emotions have manifested as literal storms of Unversed. After this is the Fissure, a small ravine containing a save point and Moogle Shop. The final area, the titular Keyblade Graveyard (キーブレード墓場, Kīburēdo Hakaba?) are crossroads, covered in the Keyblades of the wielders who fell during the Keyblade War. During his battle with the heroes, Master Xehanort creates a pillar of rock from the graveyard, and summons Kingdom Hearts to shine down upon it.

After Master Xehanort steals Terra's body and is reborn as Terra-Xehanort, Terra's soul animates his armor as the Lingering Will, locks them both within the Will's Cage (思念の檻, Shinen no Ori?), and forces him into a final battle. Meanwhile, Ventus and Vanitas have reunited into Ventus-Vanitas, and Ventus is forced to fight off Vanitas's control within Ventus's Mind (ヴェントゥスの精神世界, Ventusu no Seishin Sekai?, lit. "Ventus's Soul World"). Both of these areas vanish after the battle ends.

Terra defeats him, but this allows Master Xehanort to take over Terra's body, thus creating Terra-Xehanort. However, Terra's soul finds its way into his discarded armor, creating the Lingering Will. The two fight, eventually ending with the Lingering Will winning by knocking out Xehanort. Meanwhile, Aqua fights Braig to defend a frozen Ventus. After Braig escapes, she is knocked out by Vanitas. Before he can finish her off, Ventus thaws out and fights him. Afterwards, Vanitas shows his true face, similar to Sora's, and forces Ventus to absorb him and both are transported to the Awakening where they have their last battle while Aqua and Mickey are forced to fight Ventus, possessed by Vanitas. Vanitas is defeated in both fights and fades out of existence, and the χ-blade is destroyed, resulting with Ventus losing his completed heart. A huge blast (created by the shattered χ-blade) transports Xehanort to another world and Aqua and Ventus's bodies into the Lanes Between, where they are found and rescued by Mickey. The Lingering Will kneels down, and swears to Aqua and Ven that one day, he will end this conflict. 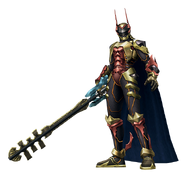 The Keyblades that appeared in the Keyblade Graveyard in Kingdom Hearts Birth by Sleep. All of these appear in the opening video as well.

Aqua in front of a crater created during the Keyblade War

Another remnant of the Keyblade War

More craters, which form a Hidden Mickey
Add a photo to this gallery

Birth by Sleep
Retrieved from "https://kingdomhearts.fandom.com/wiki/Keyblade_Graveyard?oldid=503812"
Community content is available under CC-BY-SA unless otherwise noted.