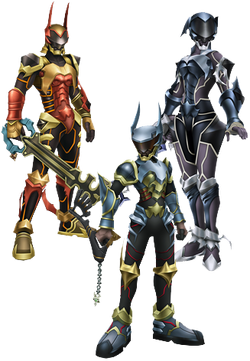 In The Gathering and the Birth by Sleep videos, the Armor worn by Terra, Aqua, and Ventus have capes. The capes were removed in Kingdom Hearts Birth by Sleep due to frame rate issues.[2]

The Lingering Will appeared to attack Terra-Xehanort in the Keyblade Graveyard, though he would later be destroyed by the latter while sacrificing itself to save Sora.

After Sora restores Kairi, the Replica Xehanorts combine to form Master Xehanort in his new Keyblade Armor in order to fight the two. However, the replicas are ultimately destroyed by the guardians of light.

To search for Sora in the Realm of Darkness, Terra, Aqua and Ventus all summon their Keyblade Armor prior to departing from the Land of Departure to help shield themselves from the darkness.

Aqua's armor as it appears when not in use