Genie, my final wish! I want you to make me an all powerful GENIE!

Jafar is a recurring villain in the Kingdom Hearts series. He is a member of Maleficent's group, and appears to be her second-in-command. He is royal vizier of Agrabah who is disliked by many, mainly Aladdin and Jasmine. Two-faced and cunning, Jafar seeks the demise of Aladdin and to rule as sultan of Agrabah.

Jafar is very cool and calculated, yet vicious and an amoral sorcerer who Maleficent regarded as "Beyond help. Consumed by his own hatred". He is seen in a mostly cool manner, yet is easily angered. He is sly, ruthless, and arrogant, ignoring Maleficent's warning about keeping his heart open to darkness for too long, simply replying "Your concern is touching, but hardly necessary". In Kingdom Hearts II, he is slightly more impulsive than before, but not quite as arrogant.

Jafar is a tall, bony man dressed in extravagant clothing, always seen carrying his gold, ruby-eyed, cobra scepter to supplement his magical powers. Jafar wears black robes that reach the ground overtop a red-violet garment with bell sleeves. Underneath this second garment, Jafar wears yet another shirt, this one black with very close-fitting sleeves that reach his wrists. The shoulders of his outer robe are pointed and connect to a long, billowing black cape with a blood red interior. His shoes are brown and the tips curl inward. A red-violet sash is tied around his waist. He also wears an odd, light-colored garment that covers his neck, the back of his head, and his chest. Jafar has a twisted, black goatee and a faint mustache, as well as grey eyeliner.

He sports a distinctive black headdress, seemingly a type of mitre, with a thin, yellow pattern wrapping around the middle, what seems to be a ruby set in the front, and a bright red feather placed just above it. More red-violet cloth hangs from the mitre, draping over Jafar's shoulders. Finally, perhaps the most subtly unique aspect of Jafar's appearance is the fact that he has five fingers on each hand, unlike any other character from his world.

Once Jafar makes his third lamp wish, he takes on a form resembling Genie himself, with some differences. Jafar's skin becomes blood red, his ears become pointed, his right ear gains a gold piercing, his hair becomes tied in a topknot, and his eyes become completely yellow. He retains his red-violet sash and five-fingered hands (albeit with claws).

Jafar was part of the group of Disney villains in favor of total control of Kingdom Hearts. Jafar, along with his parrot Iago, planned to use the Heartless to take over Agrabah. Maleficent ordered Jafar to kidnap Princess Jasmine, one of the seven Princesses of Heart. She also warned Jafar to avoid steeping himself in Darkness for too long or the Heartless would steal his heart.

When Sora, Donald, and Goofy arrive, Jafar was trying to capture the princess. Eventually they meet up with Aladdin, who tries to save her from Jafar by using Genie's powers, but the plan backfires with Jafar obtaining the lamp.

Jafar lead Sora and friends to the Cave of Wonders, where the Guardian of the Cave was possessed by Darkness. As Sora and company dealt with the Guardian, Jafar retreated to the Lamp Chamber. While there he used his first wish—to find the Keyhole of the world. The Keyhole was revealed on the far side of the chamber; shortly afterward, Sora, Aladdin, Donald, and Goofy arrived. Ensuing a battle, Jafar used his second wish for Genie to crush Sora and friends.

A slave to the lamp, Genie reluctantly fought alongside Jafar against Sora and his group. After his first defeat, Jafar used his third and final wish to make him an all powerful Genie. Sora and the gang went into the deepest part of the Cave of Wonders and fought Jafar. In the end, Sora took Jafar's lamp and sucked Jafar into the lamp along with Iago. After the battle, Hades, Captain Hook, and Riku conversed about his chances against Sora; Hades comments saying that Jafar may have won if Riku had supported him.

In Kingdom Hearts: Chain of Memories, Jafar appeared in the Agrabah made of Sora's memories with the Heartless to take over Agrabah. In order to get the lamp, he tricked Aladdin to get the lamp in an attempt to make Jasmine marry him. When Jafar stole the lamp from Aladdin, his first wish was to have Jasmine in his clutches, his second being for Genie to protect him from a sneak attack led by Sora and Aladdin, and his third wish was to become an all-powerful Genie.

He teleported Sora and his friends to the center of the earth and attacked them. His attacks were similar to those seen previously, except ice could not damage him. Instead of attacking Jafar directly, Sora attacked Iago, grabbed the lamp, and trapped Jafar inside like the previous encounter.

One year later, Jafar's lamp is found by the Peddler. Maleficent sent Pete to get the lamp and release Jafar from his prison and turn him into a Heartless. Unfortunately for Pete, Sora and friends had already arrived. Sora and gang head to the Cave of Wonders to give the Peddler treasures for the Lamp.

Sora returned to find Pete chasing the Peddler for the lamp. Pete chased the Peddler all the way to the Palace, but Iago, who had previously escaped from the lamp, snatched it in the nick of time. Angered, Pete summoned two powerful Heartless but Sora defeated them and sealed Jafar's lamp away.

However, the "defeat" was bittersweet. Due to the manipulations of Organization XIII, the Peddler found Jafar's lamp again and released him. Jafar forced Iago to keep Sora occupied by telling him that he would be in the Desert Ruins. Sora and the gang arrived at the tower in the ruins, with the help of Genie and Carpet, while Jafar kidnapped Princess Jasmine. Once Sora and Aladdin discovered the ruse, Iago informed them that Jafar would be attacking the Palace at that point.

They arrived at the Palace to find Jafar taunting Jasmine, who was chained to the gate. Jafar fired a beam of dark lightning at Aladdin, but Iago intercepted it and fell unconscious. Jafar turned into his Genie form and rose into the sky, with Sora in pursuit, riding on the magic Carpet. Sora and Jafar battled one-on-one in a battle that destroyed half of Agrabah. Sora came out the victor, with Jafar exploding, his lamp dissolving into the darkness.

Jafar appears in Kingdom Hearts coded in Agrabah, in his genie form, confronting Genie and Sora. He obtains a fake genie lamp from Pete (who made it from the world's numerous glitches running around) that, though still just a copy, is powerful enough to grant wishes, despite not seeming to have a genie inside.

He kidnaps Princess Jasmine and uses one of his wishes to throw a time-stop spell over all of Agrabah to delay Sora from getting rid of the bugs. In the game, you must fight him twice as his normal self and once as his genie form.

Jafar first made his appearance in Aladdin as the Sultan's power-hungry vizier. In his quest to seek someone suitable to enter the Cave of Wonders, "a diamond in the rough", led him to the street urchin Aladdin. With Aladdin's help, he would almost acquire an ordinary oil lamp which actually housed an all-powerful genie. However, due to unforeseen consequences, Jafar lost the lamp and his quest for power was thwarted unintentionally by Aladdin under the false identity Prince Ali al Ababwaa.

But Jafar would not give up and used his parrot companion, Iago, to steal the lamp, becoming the genie's new master and assuming total control over Agrabah using newfound powers he had wished for. He attempted to banish Aladdin to the ends of the Earth but failed as Aladdin showed up for one last showdown. Desperate, Jafar used his final wish to become an all-powerful genie but was tricked into being contained inside a lamp by Aladdin and flung out into the desert by Genie.

In The Return of Jafar, Iago escapes the lamp and throws it down a well, and the thief Abis Mal finds it. Since he found the lamp Abis Mal is technically Jafar's master, but he is so inept and cowardly that Jafar easily pushes him around and gives him orders, tricking him into wasting two of his three wishes by purposefully misinterpreting them so they backfire. Jafar arranges for Aladdin to be taken away from the city by Iago while he imprisons Jasmine and the Sultan and takes over Agrabah. Aladdin returns and engages Jafar in a final battle, and is nearly killed by Jafar's genie form, when Iago has a change of heart and intervenes to destroy Jafar's lamp, destroying Jafar for good. 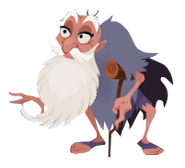