The cannonballs this heavy tank Heartless fires can be returned with a block to take out the archers perched atop it.
The battering ram that emerges from its mouth before it charges is especially weak. Capitalize on that vulnerability, but be sure to get out of there before it begins its advance.

The Infernal Engine is an Emblem Heartless can be found exclusively as a boss in Kingdom Hearts 358/2 Days.

The Infernal Engine is a large, box-shaped, apparently mechanical Heartless with four black wheels, two on either side of its body. It appears to be predominantly made of wood. Its face takes up its entire front side, with a large, red, jagged mouth with yellow "lips" on its lower half, and a black "forehead" with silver, metal additives on it. Its eyes are a glowing yellow color and its Heartless emblem is in the middle of its face. There is a wooden guardrail on its top decorated by yellow and red patterns as well as four white spikes. The Infernal Engine is able to release a battering ram, hammer and boxes from its mouth.

Riding atop of the Infernal Engine are several smaller Heartless, referred to as "archers" in the Journal. Each of these Heartless wears silver armor, including a bullet-shaped helmet with an opening for their black faces and glowing yellow eyes. All of their helmets sport two short spikes and a curled, black antenna. They have small legs which allow them to move around the top of engine. They wield large, indigo weapons that fire projectiles and each sports a Heartless emblem emblazoned on their chests.

The battle with the Infernal Engine can be quite difficult, but not if the player utilizes a good strategy. When the three lesser Heartless drive the main boss, they can allow it to perform a variety of attacks. These all appear rapidly and the flurry of moves can only be slowed by defeating the three lesser creatures. When the lesser Heartless are in control, its attacks can be avoided as follows:

As in all boss battles in Kingdom Hearts 358/2 Days, the player should utilize the Limit Break when they hit low HP. They should heal periodically using Cure, Cura, or some potions. The three smaller creatures will respawn in a short time. If this strategy is followed, and these things kept in mind, the Infernal Engine should fall rather easily. 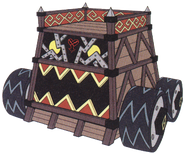 The Infernal Engine's name has several potential meanings. "Infernal" could refer to the fireballs its fires, as "infernal" can mean "of a great fire", or it could refer to its antagonistic nature, since infernal can also mean "fiendish" or "of or relating to hell". "Engine" is a reference to its apparent mechanical nature and it's use as a vehicle by the smaller Heartless archers. The Infernal Engine's Japanese name, "Demon's Fortress", reflects its massive, sturdy construct and the way the archers use it as a "fortress" of sorts. This name and the Infernal Engine's behavior are also reminiscent of the Demon Wall enemy from the Final Fantasy series.