It attacks and withdraws quickly, making it hard to hit. Use magic to defeat this enemy.

When its HP gets low, it moves around even quicker, so be sure to defeat it as soon as possible.
Mad Bumper

The Hot Rod (ホットロッド, Hotto Roddo?) is an Emblem Heartless that is found in Kingdom Hearts II. Hot Rods are Heartless resembling cartoonish cars that appeared in the Timeless River.

Hot Rods attack with their tires until a good fraction of their HP is depleted. Afterwards, they go berserk and attempt to repeatedly and rapidly mow down Sora (while paying little attention to Donald Duck and Goofy).

A Hot Rod is invincible to all physical attacks while charging, except for a few seconds after every third charge. However, it is vulnerable to magic, especially Thunder and Reflect magic.

A Hot Rod is meant to resemble a cartoonish version of real-world cars. Its body is primarily blue, and its roof is sky blue with a bent, navy blue antenna on its top. Its four black tires are set rather close together and have grey hubcaps, and its fenders are silver. The silver grill of the car acts as the Heartless's sharp-toothed mouth. It also has two headlights with yellow tips that act as its "eyes", though it has actual, glowing yellow eyes set in its black windshield. Its Heartless emblem is actually its hood ornament. Like all Heartless, it takes on a monochromatic coloration in the Timeless River.

In Kingdom Hearts II Final Mix, the Hot Rod's body, roof, and antenna are all black; its fender, underside, and headlights are white; and its tires are dark grey with white hubcaps. This makes it strongly resemble its form in the Timeless River, the only difference being that its Heartless emblem is still in color.

A "hot rod" is a car modified to run faster, particularly pre-1960s models. This references the Heartless's resemblance to a car, its tendency to damage opponents by driving at high speeds, as well as the early 1900s theme of the Timeless River, the only world it normally appears in.

Hot Rods are very fast and powerful Heartless. When half of its HP bar is depleted, a purple aura will appear around it. When this happens, watch out! It will rev up and rush towards you, and if you're in the way, it will send you flying. It does this rush attack thrice, and pauses for a while before it begins rushing towards you once again.

In all cases, when it attacks you, immediately Guard. When the Hot Rod rushes at you, a well-timed Guard or High Jump can save you from being sent flying. When it pauses, it is open for an attack, so finish it off.

Alternatively, if you're the type to use magic, use Reflega, and make sure that the edges of that spell hit the Heartless―but, time it well. 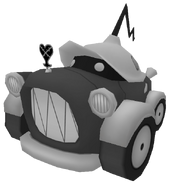