It generally flies around scoping the area. When it swoops, use Bat Battery to capture it and attack surrounding enemies.

After this attack, use combos while in the air to defeat it.
Beffudler

A Hook Bat's body is small and oval-shaped, with short ears sprouting out of the top of its head. Its eyes are small and glow yellow and its Heartless emblem is on its chest. Its mouth is jagged, and its large wings are attached to either of its sides, each sporting a silver spike close to the Heartless's head. The Hook Bat's body is blue, except for the tips of its ears and wings, which are navy blue. A short, silver chain connects the Heartless’s body to a large, red hook with a yellow base.

In Kingdom Hearts II Final Mix, the Hook Bat is predominantly dark pink, with black-tipped wings and a silver hook.

The Hook Bat's name clearly references the fact that it resembles a real-world bat, as well as the hook attached to its body.

It can be difficult and annoying to hit, since it mostly evades your strikes by simply flying. Using the Reaction Command allows Sora to grapple the hook on Hook Bat and swing wildly, damaging all foes in range. An alternate tactic is to cast Magnet to attract it and finish it with a strong spell.

The Land of Dragons 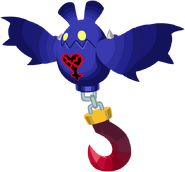