This fiery knight Heartless's skillful defense makes it tough to finish off. Though its focused slash can be stopped with a block, blasting the knight with Blizzaga while it is storing up energy will stagger it, opening it up to extra damage.
Zip Slasher
Dual Blade
Chill Ripper
Blitz Spear
Stalwart Blade
Dual Durandal

The Heat Saber is a large, humanoid Heartless covered from head to toe in silver and grey armor. The armor on its legs sport white spikes and steel blue highlights. Its helmet sports two short, white spikes and a long, twisted, black antenna. A small opening in the front just barely exposes the Heat Saber's black face and glowing yellow eyes. Its most notable features are the jagged, seemingly molten blades in place of each of its hands. It has two Heartless emblems, one on each of its shoulder pauldrons.

The Heat Saber is by no means an easy opponent to defeat. It uses the element of Fire in its slash attacks, so equipping the Fire Charm or even the Tears of Flame would be greatly helpful. After a combo by the Heat Saber, the Heartless will stay stunned for a small period of time; at this time, attack with Blizzard magic, as this is not only the only type of attack magic that it is affected by, but also its weakness. Be sure to stock several Panaceas, for many of the Heat Saber's attacks have a 100% chance of igniting you.

However, it can recover quickly from your attacks. Continue in the pattern of dodging the Heat Saber's combo and using Blizzard magic while it pauses, and this Heartless should fall.

Also, attacking this Heartless while it is storing energy will cause it to immediately perform its focused slash. Instead, when it is storing energy, prepare to block the focused slash that will follow. Blocking the attack will cause it to stay unconscious for a few seconds, giving you a while to attack it. During this time, the Heat Saber will receive extra damage from attacks. Alternatively, hitting the Heartless with Blizzard magic while it's charging will stun it for longer periods of time. 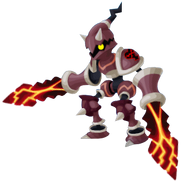