Mother Gothel's fall to darkness gave rise to this gargantuan Heartless, and it's even crueler than she was--which is saying something.
Wrapping its enormous body around the tower, it used branches and brambles to try and rob Sora, Donald, and Goofy of their freedom. Sounds like Mother Gothel, all right...
The Grim Guardianess is an Emblem Heartless which is found in Kingdom Hearts III. She embodies the heartlessness of Mother Gothel and is the last boss opponent for Sora in the World Kingdom of Corona.

When Mother Gothel dies, Marluxia transforms the remaining darkness in her cape into a Heartless. Sora, Donald and Goofy fight it outside Rapunzel's tower.

It is based on a mutated tree, with light brown bark skin, four twisted arms with four fingers each, a long snake-like tail (the tips of the fingers and tail are colored purple), and the head is covered in a covering of leaves like a tree with roots dangling over the swirling yellow eyes. The symbol is shown on the forehead.

It can summon three barriers of thorns that try to block Sora and his pals, but there are gaps in each barrier, and if Sora passes these, the Grim Guardianess will drop a kind of fruit that explode on impact. It will also plant evil plants that wrap Sora in twisted vines. Another attack it uses is to barf a swarm of crows out of its mouth and swoop onto Sora and his friends. Depending on how much damage is dealt onto the heartless; it will climb to the top of the tower rain down more exploding fruits. 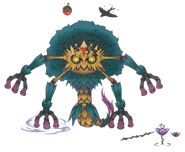