Medal Orb x 16
HP Orb x 8
A Grappler is a type of Nobody Ship that appears in various Gummi Missions in Kingdom Hearts II and Kingdom Hearts II Final Mix. It will attempt to latch on to the Gummi Ship, and if successful, it often hinders movement. It can easily be thrown off by doing a barrel roll, but if defeated in this manner does not drop any prizes. There are also Red and Gold versions of this Nobody Ship that drop treasures if defeated.

The Grappler's main body is cone-shaped and black. Its "face" is also conical and black with a white cross on it that resembles the Nobody logo. A red ring with small black vents lining it splits the Nobody's body and head. Its arms are large, yellow, and conical with black ends, The front ends of its arms are red and both have two black pincers on them.

The Grappler's name references both its clawed hands and its battle tactics. The word "grapple" can be used in a nautical sense to refer to a clawed device used to hold an enemy ship in place for boarding. It can also refer to a close, hand-to-hand struggle. 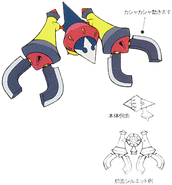