View source
watch 02:36
Wiki Targeted (Games)
Do you like this video?
Play Sound

Yūbi-naru Daria
A powerful weapon that draws forth its wielder's true worth.

Zero Gear ⑤ (Marluxia)
Graceful Dahlia (優美なるダリア, Yūbi-naru Daria?) is a Scythe that can be wielded by Marluxia in Kingdom Hearts 358/2 Days.

The handle of the Graceful Dahlia is long, pastel green, and curved. There are two small, gold rings near the top of the handle. There is a small, black section at the base of the handle, and an equally small, gold section just above that. The main blade is curved, rose pink, and has black under edges. There is another vaguely oval-shaped blade attached to the top of the handle. This smaller blade is also rose pink with black edges. The two blades are connected by a cross shape that resembles the top half of the Nobody insignia that is white with gold and dark rose pink edges. The overall design of Graceful Dahlia gives it the appearance of a plucked flower.

During Marluxia's brief appearance in the opening sequence of Kingdom Hearts II, the cross design on the upper part of this scythe is hollow.

"Dahlia" is a fairly small genus of flowers. "Graceful" means "elegant" and refers to Marluxia's title within Organization XIII, the "Graceful Assassin".

The ground combo consists of two horizontal swings, followed by an upper swing before being brought down as a combo finisher. Before the upper swing, the

button can be pressed for a leaping diagonal upper swing before a descending spinning attack that hits multiple times as a combo finisher. The aerial combo begins with a quick upward slash to the left and finishes with a circular-angled slash. 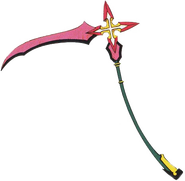