Timing plays a very important role in this match. While fighting Ice Titan, it is crucial that you must "bat" back the ice shards he fires at you using Guard. Once you retaliate enough ice shards back at him, he will fall to his knee for a few seconds; during that time he is very vulnerable so you can hit him with air combos or Ragnarok. After getting back up, the Ice Titan sends out a flurry of ice shards.

Another fact is the Ice Titan is very vulnerable to Fire. Jump onto the stands and lock on to his head while using Dodge Roll or simply running helter-skelter to evade his attacks. When you get a chance, jump off of the stands and use the Fire spell on him. This takes longer but has the same effect in the end. In some cases, it is possible to jump onto his hand (when he smashes it onto the ground) and ride it up near his head to get one air combo attack on him before you fall on the ground.

Ice Titan's other attacks include summoning shards of ice from the ground, conjuring snowballs to fall on top of you, creating an icy mist to freeze you in place, and when he gets to yellow health, he does a stronger move that also freezes you. All of these moves can be avoided, so it is advised to be continually moving. The Ice Titan can also use an attack in which it creates slick ice on the ground that Sora can slip on. Sora will be unable to attack while slipping, though he takes no damage from other attacks. Stay close to corners when he starts to look angry, lifting his hands in the air (This only happens when he is in his yellow and green health bar). In fact, it allows you to dodge two of his attacks that freeze you.

The moves you should put on shortcut are Firaga and Curaga.

You can use Strike Raid to hit him, although the damage that is caused is minimal. Furthermore, because you must stand still while throwing, this makes you highly vulnerable and is not advised.

Ice Titan can be relatively easy once you manage to strike the ice shards back and dodge his attacks. On top of that, defeating him will also grants you tons of EXP, as Ice Titan himself gives 5000 EXP and each ice shard deflected gives 24 - in fact, you can get more EXP deflecting his attacks than by beating him. For those who are playing Kingdom Hearts Final Mix, equipping multiple Tech Boosts can allow each ice shard deflected to give you up to 120 EXP.

It is important to note that the usage of any type of Aero magic makes the Ice Titan stronger instead of hindering him - his icicles become larger and cannot be deflected, which is a key factor of the battle. 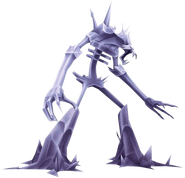 Ice Titan
Add a photo to this gallery
Minigames
Retrieved from "https://kingdomhearts.fandom.com/wiki/Gold_Match?oldid=789133"
Community content is available under CC-BY-SA unless otherwise noted.