This winged Heartless stuns foes and negates status effects. Use Medals with high attack power to bring it down!

Winged Heartless that mostly appears in Halloween Town.
They can move from one place to another almost without notice. Since they are prone to sneak attack, they often get caught off guard by counter attacks.

A winged Heartless that mainly appears in Halloween Town.
It pelts its stunned opponents with fireballs.

Vaguely resembling their architectural counterparts, Heartless Gargoyles appear fairly rough around the edges. Their dark grey skin is covered by a dark purple bodysuit with roughly stitched-on light purple sleeves that end in a gold zig-zag trim and jagged edges. The purple color extends to cover the head and horns, and the horns also feature black stripes. Like other Heartless, the Gargoyle has golden eyes and a craggy maw, but it can unhinge its jaw to fearsome proportions. Their talons are long, but not nearly as alien as their dark grey feet, which are spindly and two-toed. Their leather-like wings are also pointy and sharp, particularly the tops which resemble spires, spearheads, or even a portion of the Nobody symbol.

The Gargoyle gets its name from resembling architectural gargoyles, stone representations of a mythological spirit said to ward off darkness.

This type of Heartless has a hard-to-read attack cycle. One moment it is in orb form, flying around Sora's head, the next moment charging up an attack by spewing a homing ball of light from its mouth. This Heartless actually only has a few basic attacks, but they are quite powerful, so watch out. 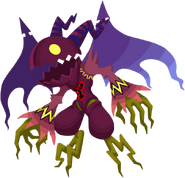 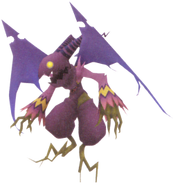 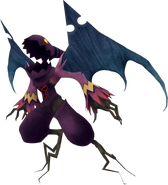 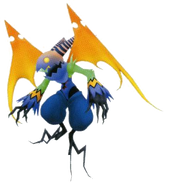 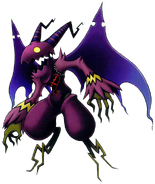