A gambler. A high-ranking Nobody. It doesn't seem to like fighting, and just floats around aimlessly.

Use the reaction command when it attacks with cards and dice, and let the games begin!

Don't lose, for something terrible happens. Win for a chance to attack—and maybe even for a little something extra!

It's all fun and games until somebody gets mauled by a giant playing card. Can you imagine the paper cuts from those things?! When a hand of them start circling you, watch for a flash; that's your cue to dodge.

Not interested in playing dice? Try playing baseball. Batter up!

A Gambler does not seem to have an actual body, and is instead an animated set of clothing. Its upper body is comprised of a pink coat with very thin, dark salmon-colored bell sleeves. It juggles dice and playing cards decorated with Nobody symbols in various ways through these sleeves. Either side of its long neck sports a dark salmon colored spike like those on the Nobody logo, and the Nobody's "head" has the same shape.

The Gambler's lower body is a faded pink gown that widens near the base with a black crease running down, and is decorated by several small, white Nobody logos. Its feet are long, flat, and black. The Nobody's lower and upper bodies are not directly connected in any way, and the two halves will occasionally become separated when the Gambler is being attacked. Its overall body structure is meant to resemble the Nobody sigil. Like all Nobodies, Gamblers have astonishing flexibility.

The Gambler's name refers to a Final Fantasy job class of the same name.

In-game, it drops the most amount of munny of any enemy, but not by defeating one. Instead, munny is rewarded by winning one of its games. Winning a game, be it a Stop Dice or Card game, forces the Nobody to drop 100 munny and stuns it.

If there are multiple Gamblers present, one game will force all Gamblers on the ground to drop 100 munny. For example: you engage four Gamblers in a battle and one challenges you to a dice or card game. If you win it and all four Gamblers happen to be on the ground, they will collectively drop 400 munny.

You can also get a Nobody Guard shield or Twilight Shard by winning, which the Gambler will drop onto the ground. The Jackpot Ability makes them drop 50 additional munny for every Jackpot ability equipped.

Have everyone equipped with the Jackpot ability. Sora should also have Wishing Lamp. Lots of Gamblers appear in Port Royal, especially where you fought Captain Barbossa. Master the Reaction Commands above, and you will be making a lot of munny. The same basic principle (Wishing Lamp does not have to be equipped), can be used in the Underworld Cups, to get a lot of points.

This is also a good opportunity to level up summons. Before going into a room with Gamblers, summon Genie. Genie will never attack unless he's told to. The main reason you want a summon is if Sora loses a game with a Gambler and he has a summon active, he will never turn into a card or die. 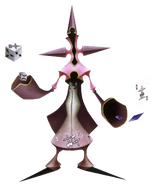