View source
watch 01:59
Tips and Tricks: How to Unlock the Final Form in Kingdom Hearts 2
Do you like this video?
Play Sound
Cleanup required
This article may need to be rewritten to conform to a higher standard of style, verification, or use of media. 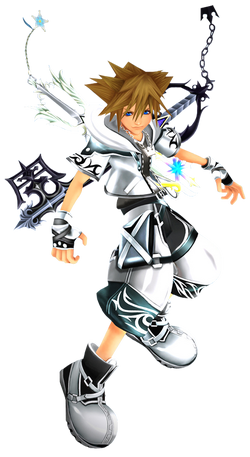 It represents Sora's completion,[1] and can be unlocked after Sora and Roxas come to terms at the Dive to the Heart.

Final Form is unlocked rather unusually. It can be obtained randomly after Sora's fight with Roxas at The World That Never Was while attempting to activate another Drive Form. After it is obtained the first time, it may be activated normally. Final Form uses 5 Drive Points, being the most costly Drive Form.

When in Final Form, Sora constantly hovers above the ground. Similar to Sora's Valor Form and Master Form, his Final Form wields two Keyblades, though, unlike other forms, these Keyblades float behind him, while he manipulates them through telekinesis. The Keyblades will strike when Sora jumps or glides as well, making most of his actions effectively attacks.

Though turning into Final Form is completely random at first, once obtained it may be used like any other form. His combos unleash numerous blows as the Keyblades spin and twirl, dealing "grinding" damage. Final Form appears to combine elements from each of his other forms.

It possesses the sheer power of Valor Form, the magical prowess of Wisdom Form, the large area-effective moves of Master Form (which happen to be effective at drawing enemies in), and the rapid-speed, extremely long combos of Anti Form, as well as the dual wield feature of Valor and Master form. It does, however, lack the long-range advantages of Wisdom Form.

While in this form, Sora displays much more skill than in the others, as well. The Keyblades act as though they have minds of their own; Sora effortlessly sends them slicing into enemies with a flick of his wrist and launches into long combos, engulfed in energy, that pierce right through the enemies' defenses. In addition, Sora's light powers are greatly enhanced to the max.

Sora's clothes in this form are silver and black, with the symbols on his pants somewhat resembling an eye with a wind pattern. This may be referenced to the fact that while Anti Form resembles a Heartless, Final Form, which is silver and possesses the traits of Nobodies, can be obtained after Roxas comes to terms with Sora. Each Keyblade seems to move with an arm, though when Sora stops moving they hover behind him. Thus, every move is an attack in itself.

While in Final Form, Sora never touches the ground except for when landing. Sora's hair and clothes slowly flow as if he is being held by the wind. His clothes glow on and off while the form is active, and two large sparkles of light with silver trails move randomly around Sora. When Sora is standing still, the position of his Keyblades seem to represent folded angel wings. When he floats (walks/runs), they open, as if Sora is flying.

Just like Wisdom and Master Form, Sora's magic spells are enhanced while in Final Form. Like Wisdom Form, Sora can cast magic while moving through Mobile Action, and unlike Master Form, he retains magic combos and by extension, finishers. His spells reach their peak strength, all having above-average casting speed along with extremely powerful finishers.

Obtaining Final Form isn't as incredibly tricky or as random as many believe. Normally, Final Form can be activated randomly at anytime any other Drive Form is activated (in Kingdom Hearts II Final Mix however, the Two Become One Keyblade must be equipped) after encountering Roxas at Memory's Skyscraper in The World That Never Was.

After encountering Roxas, head for the next Save Point and fly to Olympus Coliseum and enter the Cerberus Cup. Upon entering, Sora will start with a full Drive Gauge so he can begin transforming immediately. If Final Form activates, the player can exit the match and still have a full Drive Gauge. If Final Form fails to activate, simply restart the match until it does.

The process of obtaining Final Form is made much easier in Kingdom Hearts II Final Mix, due to the addition of the Two Become One Keyblade which while equipped makes all form transformations either turn Sora into Anti Form or Final Form. After Roxas's defeat, the player must not progress past the Brink of Despair; though receiving Final Form remains possible, it becomes harder to obtain. As long as Nothing's Call is not entered, Donald and Goofy will become and remain Talk NPCs while in the Brink of Despair.

As a result, entering the room will automatically Revert Sora if he is in a Drive Form while also returning a full Drive Gauge to him (even in Anti Form). If Nothing's Call has not been entered, simply backtrack to Memory's Skyscraper where Shadows and Neoshadows are found and enter a Drive Form with Two Become One equipped, reentering Brink of Despair if Anti Form is activated. One out of five Drive Form transformation attempts is guaranteed to be Final Form while that Keyblade is equipped, and is therefore the quickest way to obtain the form. If for any reason Nothing's Call has been entered, then the Cerberus Cup in the Underworld Coliseum is the only other easy method.

Out of all the forms, Final Form may be the most difficult to level, since it gains experience only from defeating Nobodies. A good way to easily level up Final Form would be to run through all levels of The World That Never Was in Final Form, and defeat all enemies in each room before moving to the next one.

The Naught's Skyway area in The World That Never Was is a good place to level Final Form, since it is full of Creeper Nobodies, with the only drawback being its distance from the nearest Save Point. Magnega is especially useful against the low-health, high-number Creepers.

The Mysterious Tower also serves as a good place to level, as it is filled with relatively weak nobodies. Equipping the Form Boost ability (when obtained) and Oathkeeper is advised, as the Drive Gauge will deplete very fast during attacks. Magnet can help defeat the enemies faster without depleting as much of Sora's Drive Gauge.

It is advised to be in air when using Magnet, as using it on the ground will make Sora unable to perform other actions while it lasts. Return to the nearest Save Point before the Drive Gauge depletes entirely, and re-enter the world to quickly reset it to maximum. If the Drive Gauge depletes, it can be restored by using Drive Recoveries, hitting enemies, or by entering and exiting the Cerberus Cup.

Another good place to level up Final Form is Ruin and Creation's Passage after defeating Xemnas. This gives the player the benefit of recharging Drive Form at any time, while also having relatively weak Nobodies in the area.

Of note is that Nobody bosses count also towards Final Form's experience. This includes not just Organization XIII and variations of the group's members, but also Twilight Thorn as well.[2][3]