Heartless that mostly appear in Agrabah. They are well-balanced offensively and defensively. Besides strong physical attack, they use fire, and they block attacks against them. Their movement is their weakness.

A Heartless that mainly appears in Agrabah.
The Fat Bandit repels frontal attacks with its jiggly belly and spits fireballs.

Immune to fire magic, it parries most attacks dealt from the front. Use the Rush attack from behind and defeat it with a combo attack.
Parry its fire bombs for a chance to unleash Full Swing!

Tubby tough guys who show up in Agrabah. These Heartless balance offense and defense, flinging fire one moment and belly-bouncing back your attacks the next. While formidable opponents, they are anything but fast, and leave themselves wide open if you know where to strike.
Large Body
Large Armor
Clay Armor
Solid Armor
Land Armor
Large Snowman
Huge Snowman
Ringmaster
Helmed Body

The Fat Bandit is an Emblem Heartless that is found throughout the Kingdom Hearts series.

"Fat Bandit" is the perfect name for these massive, essentially spherical Heartless. A cousin of the more svelte Bandit, Fat Bandits boast the blue skin, turbans, face masks, and curled-toe shoes of their skinnier counterparts. Their dress is stereotypically Arabian, in keeping with the area they tend to be seen most in, and is bright and colorful, probably to distinguish them from the similarly shaped but more muted Large Bodies. Fat Bandits are clad in an orange, pointy-shouldered vest trimmed in light yellow, light orange wristbands, a yellow sash, and bright green baggy pants, the warm colors serving as a warning of their Fire-based magic abilities.

The Fat Bandit's name references the size of the Heartless's round, bloated body, and highlights its resemblance to Arabian thugs. Historically, bandits were outlaws that would commit crimes such as robbery or murder.

They are quite similar to Large Bodies, since damage to their front side is negated, but can attack with fire, by spitting it and breathing it. They can turn around much faster to protect their backsides, whereas the Large Body cannot.

Because of their long range fire-based attacks, Fat Bandits are best attacked with magic from afar. However, Fire has no effect on them. The Fat Bandits also take damage from attacks to the head, and are very easy to attack when they turn around to charge up their attack that sends a wave of fire on the floor. 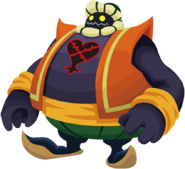 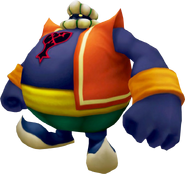 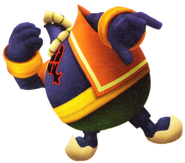 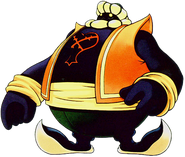 Concept Art
Add a photo to this gallery

Heartless
Retrieved from "https://kingdomhearts.fandom.com/wiki/Fat_Bandit?oldid=750202"
Community content is available under CC-BY-SA unless otherwise noted.