View source
watch 04:03
Wiki Targeted (Games)
Do you like this video?
Play Sound

Face My Fears is the opening song to Kingdom Hearts III and is sung by Hikaru Utada, with the songs music being remixed by Skrillex.

The opening starts with Sora standing in a watery void, talking about how people can take anything from you but fate will always lead you home.

We then see Young Xehanort in Scala ad Caelum, sitting next to a chessboard. He notices a purple star in the sky an gets entranced by it. He the picks up a chess piece, decorated with Vanitas' keychain, and places it on the board, causing black smoke to bellow from it. The smoke spreads over the world until it reaches the Land of Departure. Aqua, Terra and Ventus run out and watch in horror as their world gets covered in the smoke. The smoke covers Terra, transforming him into Terra-Xehanort.

Aqua reaches out to Terra, but gets pulled into the Realm of Darkness by the smoke. Ventus looks shocked by all this, but sees the smoke heading for him next. We then see him standing on a mural depicting him and Vanitas, with him making a determined face, ready to fight. Suddenly the mural shatters, sending Ventus falling. He then closes his eyes and turns into a shooting star, which lands on the Destiny Islands.

The opening then fast forwards ten years later, with Sora, Riku and Kairi playing on the beach. Suddenly Xehanort plays a piece representing Ansem, Seeker of Darkness, and the world gets covered in shadow. Riku turns round to face Sora and turns into Ansem, who smiles wickedly at him. Sora is then blown away by the wind. He passes by Kairi, and the two try to grab each others hand, but they drift apart and Sora falls into a chess piece representing himself.

The camera swerves around the chessboard showing other pieces, one of which representing Riku, which is right next to the Ansem piece. Lightning strikes as Xehanort tosses a piece in the air playfully as he considers his next move, smiling with delight. Outside the window, Sora falls into a sunny cloudy void, he opens his dreary eyes to look at the sun.

We suddenly cut to Roxas, who is watching the sunset with Axel and Xion. Suddenly Xehanort plays the Xemnas piece. Roxas drops his ice cream and see that Axel and Xion are gone. Roxas looks out and sees that Xion is standing in the middle of the air with her hood up, as dark clouds fall from the sky. Roxas runs to her to try and save her, but as soon as he grabs her arm she disappears, leaving only a seashell in his hand.

Roxas lets out a cry of despair. Xemnas walks behind him, which makes Roxas realize that Axel is to his right, getting drench in the rain with a sad look on his face. The two of them summon their weapons and run to each other. Before they clash the camera zooms into the spaces between board's squares. We see a spiralling image of all Xeharnort's other pieces, which leads to a piece representing Kairi.

This fades to the cave drawing the two of them made, the one that they both separately modified to be them sharing the Paopu Fruit with each other. Kairi looks at the drawing and cries. Her tear falls on the ground, and seems to shine light in the black void Sora is falling in. This wakes Sora up, causing him to age up into his Kingdom Hearts II appearance.

He then summons his Keyblade and slices at the darkness, causing the light to shine in. The light shines on Roxas, Axel, Xion, Terra, Aqua, Ventus and Riku, as they stand in a black void. They all seem to separately act out each others movements as they leave their shadowy prison.

When then see Sora standing on the chessboard, surrounded by the gigantic chess pieces. Sora draws his weapon and charges at Ansem. Ansem tries to fend him off with some dark projectiles, but Sora deflects them. Sora then tries to attack Ansem, but he manages to get away before Sora can land the final strike. Before Sora can chase after him, Marluxia appears and slices an attack at him. Sora manages to avoid him by jumping off of his scythe, but soon finds himself clashing with Xemnas. Xemnas transforms into his Final Form, but Sora manages to defeat him, similar to how he was defeated at the end of Kingdom Hearts II.

We then cut to Kairi on Destiny Islands. Sora and her are glad to be reunited, but as soon as they get closer to each other lightning strikes, all of which seems to be gravitated around Sora. They look around and the scene transitions to their chess pieces on the board, which are surrounded by Xehanort's pieces. Xehanort then plays another piece, which represents himself. He then smiles at the camera, and in a flash of lightning transforms into Master Xehanort. Suddenly, Sora and Kairi find themselves surrounded by the Organization, in what looks like the Keyblade Graveyard.

Xehanort appears before them and orders Ansem and Xemnas to attack them, but Donald and Goofy block Amsem's attack. Xemnas tries to attack them from behind, but Way to the Dawn and Kingdom Key D fall from the sky and scares him off. Riku and Mickey pick up their Keyblades, and Sora and Kairi summon theirs, as they all prepare to fight. Xehanort draws his Keyblade in excitement, as the Organization teleports behind him. Sora seems reluctant, but Kairi encourages him, and he fires a shot into the sky, which causes the clouds to part and shines a light on everyone.

The light transitions us back to Young Xehanort, who looks down at the chessboard, revealing that only Sora's chess piece is left in the center. Sora is seen in the watery void, holding Xehanort's piece. He then looks up at Kingdom Hearts, as all the people affected by Xehanort personally appear around him. 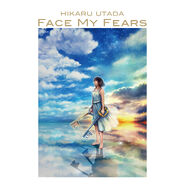