The number above this brute gets smaller with every Medal you use. Once it reaches 0, there's a slim chance it'll unleash a devastating attack.

The kind of Heartless nightmares are made of. In addition to having high Strength, it can use its shield to repel attacks, and it will teleport after you if you try to create some distance. Attempt this fight knowing that it may be your last.
Defender
Armed Warrior
Pleasure Dog
Upright Defender
Reversed Defender

The Eliminator resembles a knight clad in purple and red armor with white trim and yellow buttons; it also has the tell-tale Heartless zig-zag jawline, with a purple head and a silver jaw. The arms and torso are also proportioned much larger than the head and legs, the arm not holding the Eliminator's main weapon actually rests ape-like on the ground.

In battle, the portion of a Eliminator that tends to be seen most is the massive and fearsome shield. The barrier portion of the shield is a simple red and purple-red pattern with white trim, but far more prominent is the very large and very dangerous red-black dog head, complete with sharp fangs and spiked collar. The dog also has three glowing eyes arranged in a triangle formation, two yellow eyes on the bottom and one red eye on the top.

The Eliminator is a palette swap of the Defender.

The Eliminator's name probably refers to the fact that it can easily defeat the player with just a few attacks if the player is not prepared to fight this Heartless.

An Eliminator will, like Gold Tricholomas, appear randomly when you enter a new System Sector while a terminal is opened. It will shoot three orbs of energy that when hit, will inflict a random status effect and effectively decrease your HP, but if you are close enough, it will hit you with its shield. While both attacks can be blocked, they deal a great amount of damage. It also teleports when it is far from the player, encountering one may cause death and loss of a large amount of SP to the player if the player isn't well-equipped. It is also immune to all status effects and it will guard against frontal attacks.

If you don't want to fight it, run to a door that leads to a terminal. By doing this, the Eliminator will not follow you to the other room, but it may cause another to spawn in the other System Sector.

Equipping Oathkeeper is recommended, since its LV1 Clock ability is Undo, which protects the user from all status effects. Ideally, one would walk up close so that the Eliminator would use its lunge attack, but quickly roll out of the way to get in a few swipes. Rinse and repeat as needed, however keep in mind that if the Eliminator is using the 3 blasts attack, it will track you down as you try to get behind it! It is somewhat slow to unleash a first volley, so it's also safe to use the HP Cheat to reduce all HP to 1 before fighting it, then get behind it and attack as soon as it appears. Lionheart is extremely effective when using this strategy, as it strikes with extreme speed and usually destroys this Heartless in seconds.

Another method is equipping the Ultima Weapon, a Megalixir, a Zantetsuken or two and have the "Zantetsu Prime" ability with the Ultima. Use the megalixir to be at MAX overclock, then wait for it to teleport near enough, then use Zantetsuken. This will destroy it instantly, if it hits, piercing their normally impenetrable shield. 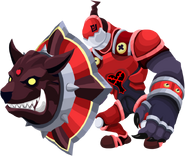