If you want to rock these baddies' world, aim for the face; their pointy posteriors will only deflect your blows. Physical attacks will pass through them when they sand-travel, but spells still hit home, so mash that magic!

When they gather sand and grow enormous, a Goofy Bombardier will cut them down to size in no time.
Flame Core
Water Core

The Earth Core bears a striking resemblance to the Darkball; however, it lacks the Darkball's tentacles, and appears slightly bigger in size, taking on a more oval shape physically than a circular. It has multiple brown spikes sprouting from its back, making it resemble a porcupine, which it can use to deflect attacks.

The tower form is a tall sand tower with a face that's similar to the core's, with spikes on top of the head and surrounding the column.

It is pretty weak when facing this heartless in the face, but its backside is invulnerable to normal attacks unless Sora has a keyblade that penetrates the protective shield either by strength or magic. It can also bury its face in the ground with its spiky backside showing, which then spins around and knocks the player into the air, and will eventually stop. The tower form appears by rising out of a sand filled area; it pounds into the ground, and swings it head at the player. 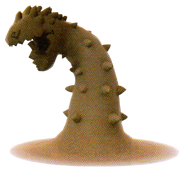