This cutting creature paralyzes its foes. Take it down before it has a chance to attack.

This large and aggressive knight Heartless's skillful defense makes it tough to finish off. Though its focused slash can be stopped with a block, blasting the knight with Thundaga while it is storing up energy will stagger it, opening it up to extra damage, especially from magic.
Zip Slasher
Heat Saber
Chill Ripper
Blitz Spear
Stalwart Blade
Dual Durandal

A Dual Blade is a large, humanoid Heartless covered from head to toe in silver and grey armor. The armor on its legs sport white spikes and steel blue highlights. Its helmet sports two short, white spikes and a long, twisted, black antenna. A small opening in the front just barely exposes the Dual Blade's black face and glowing yellow eyes. Its most notable features are the blue interweaving blades in place of each of its hands. It has two Heartless emblems, one on each of its shoulder pauldrons.

When facing a Dual Blade, it is best the player keep in constant motion to avoid the Heartless's attacks. Block its spinning thrust attack, and jump to avoid the Aerora spells it launches. When the Heartless jumps high into the air, be sure to jump and Glide out of the way, or suffer damage when it comes down and causes a short-ranged shockwave to erupt.

A well-timed Dodge Roll can also prevent damage. When the Dual Blade charges power, immediately Block to avoid the powerful long-range slash attack that follows, as it may inflict the Air-Toss status effect. Blocking this attack successfully will cause the Heartless to collapse, increasing damage that can be done with magic or attacks. As the Dual Blade's journal entry suggests, Thundaga will have the same effect on this Heartless. Once it recovers, the Dual Blade will use the attacks in its arsenal at random. So long as one heals regularly and uses their Limit Break or magic as needed, the Dual Blade should not be much of a challenge.

On Mission 54, the pumpkin bombs on the floor are pretty useful. After hitting one of them, lure the Dual Blade to get near it, and the explosion should take out 1 bar of the Heartless's HP. 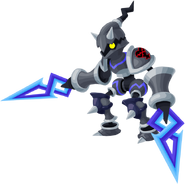