Kingdom Hearts Wiki
Register
Don't have an account?
Sign In
Advertisement
in: Section needed, Worlds in Birth by Sleep, Worlds in Melody of Memory

Disney Town is a world that appears in Kingdom Hearts Birth by Sleep. It is the home world of Mickey Mouse, Donald Duck, Goofy, Minnie Mouse, Daisy Duck, Huey, Dewey, and Louie, Chip and Dale, Horace Horsecollar, Pluto, Pete, and other characters from the Mickey Mouse universe.

Oh yeah, I got you these tickets—lifetime passes to Disney Town. He said to— he said to take two grown-ups.

Ventus while giving Disney Town passports to Terra and Aqua

At this time, a festival called the "Dream Festival" is being held by Queen Minnie. Many events are held at this festival, and whoever gains the most popularity votes becomes awarded with the Million Dreams Award.

After being handed a Disney Town Passport, Terra stops by at Disney Town. Just then, he sees a group of Unversed on the racing course of "Rumble Racing". He attempts to go after them only to almost be run over by Pete in his vehicle, posing as "Captain Dark". Luckily, Queen Minnie alerts Terra just in time for him to avoid it. The queen, Chip and Dale suggest to him to participate in the race as a means to stop the Unversed without breaking the rules.

Participating in the race allows Terra to discover that he may not need to give in to the darkness in order to achieve his goals, that following the rules may give him the same accomplishment. He also receives votes from Chip and Dale.

If Terra receives the Million Dreams Award, he is presented the "Rockin' Crunch Ice Cream".

Ventus is immediately greeted by Pete, posing as Captain Justice. He tells him of the Dream Festival, and then becomes distracted by Huey, Dewey, and Louie, who are trying unsuccessfully to make ice-cream with a machine left by Scrooge McDuck. After Pete's multiple failed attempts to fix it, Ven offers to try. After a few keystrokes, he finally sets it right.

If Ven receives the Million Dreams Award, he is presented with the "Double Crunch Ice Cream".

Aqua is greeted by Pete posing as Captain Justice, just as she arrives in town. Horace Horsecollar comes yelling for help after the Unversed infest the "Fruitball" Area. Aqua volunteers to help after Pete runs away in fear of battling monsters. After she defeats the Unversed, Minnie appears to thank her.

Horace introduces her as the queen and Aqua bows to show her respect, but she tells her to not be so formal. After Queen Minnie explains the Dream Festival and how Pete has been attempting to win others' votes, Horace votes Aqua as his hero. At the end of the festival Aqua wins the Million dreams Award and is presented with the "Royalberry Ice Cream".

While Aqua is accepting her award Pete rushes on stage claiming that he should be the winner. Queen Minnie gets angry and banishes him to another dimension. Maleficent's voice can be heard offering to help him escape if he will become her ally, he agrees and is seen walking through a portal she created.

At the end of the game Huey, Dewey, and Louie are competing in a Race in the Rumble Race course where Huey is the victor. Observing them is Queen Minnie, Pluto, Horace Horsecollar, Chip, and Dale.

In Disney Town, Pete dresses up as Captain Justice and Captain Dark in a plot to win the Million Dreams Award. 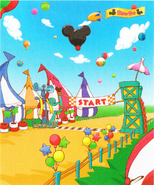 Artwork of the starting track for Disney Town's races.

Locations in Birth by Sleep
Community content is available under CC-BY-SA unless otherwise noted.
Advertisement