The Dimension Link (ディメンションリンク, Dimenshon Rinku?), also known as D-Link, is a feature of Summoning in Kingdom Hearts Birth by Sleep and Kingdom Hearts Birth by Sleep Final Mix. Its name connects to its purpose as a link to summon a character's power from another world. The power originates from a spell Aqua puts on the Wayfinders she and her friends carry. The characters create D-Links with those they form friendships with throughout their adventure.

To use the D-Link (or Dimension Link) system, it must be added as a D-Link Command in its own separate D-Link menu and can only be used when the D-Link gauge is full. The D-Link gauge is blue and next to the HP meter. The D-link gauge is filled by obtaining dropped blue prizes from enemies similar to obtaining Drive Orbs to fill the Drive Gauge in Kingdom Hearts II.

Once the characters have been linked, the Command gauge changes to indicate the linked character, including his or her name, and the face of the linked companion will show up on the bottom right of the screen. When initiating a D-Link, a character's HP will be immediately fully replenished. By linking to a character, the character that linked with them will become more powerful and will also be able to use unique Finish moves which have two different power up levels: one for each symbol next to the character image on the right of the screen.

While linked, the D-Link gauge decreases continuously, and the link is broken when the gauge is completely empty, or when the player moves to another map or brings up the main menu.

The player is also able to D-Link their friends while using their wireless functions. They appear as Terra, Aqua, or Ventus in their armor (including the corresponding D-Link abilities), as Deck Commands and Finish Command will be set as the ones the player's friend will be using when the D-Link is activated, granting the use of other characters' exclusive Deck and Finish Commands (such as Air Flair, Rising Rock, Magic Pulse, or Meteor) with all characters, using wireless D-Link.

D-Links can be disabled for in-battle use in order to shorten the D-Link menu, notably when a player has many friends as D-Links.

The ability to use D-Links is disabled in the Mirage Arena and enemies do not drop D-Orbs to increase the D-Link gauge. There has been no official information as to why this occurs, but speculation implies it might be to let the player rely on their Commands and Shot Lock as opposed to some destructive combos that D-Links may incur. 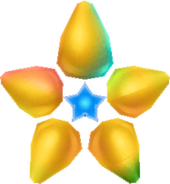 The emblem obtained to power up D-Links.