This Heartless lives by the words "the best offense is a good defense." Utilize your special attacks to overcome its mighty guard, then claim victory!

Heartless that mostly appear in Hollow Bastion. They carry an eerie shield with a face that casts Fire and Blizzard and bites nearby enemies.

A Heartless that primarily resides in Hollow Bastion.
Its shield stops head-on physical and magical attacks, and can launch fireballs.
The Defender is also a skilled card user, and will break the cards of unprepared opponents.

Heartless that tote eerie shields which bite at you, cast Fire and Blizzard—and, of course, repel your attacks. Thankfully, Defenders are slow and easy to get the jump on.
Eliminator
Armed Warrior
Pleasure Dog
Upright Defender
Reversed Defender

One of the Hollow Bastion Heartless, the Defender is essentially a Goofy-themed enemy and counterpart to the Wizard. Defenders have two minds; the Defender's shield has a mind of its own. Though Defenders do not do much themselves, their shields use Fire and Blizzard magic, block attacks, and bite approaching targets. There is only a 0.2% chance that a Defender would leave behind its shield, which is equal to a 1 in 500 chance, making the shield extremely rare. It is suggested that one equip as many Lucky Strike abilities as possible in order to attain the shield, Defender.

The Defenders themselves are rather simple in design, resembling a knight clad in purple and blue armor with white trim and yellow buttons; they also have the tell-tale Heartless zig-zag jawline, with a purple head and a silver jaw. The arms and torso are also proportioned much larger than the head and legs; the arm not holding the Defender's main weapon actually rests ape-like on the ground.

In battle, the portion of a Defender that tends to be seen most is the massive and fearsome shield. The barrier portion of the shield is a simple blue and light blue pattern with gold trim, but far more prominent is the very large and very dangerous blue-black dog head, complete with sharp fangs and spiked collar. The dog also has three glowing yellow eyes arranged in a triangle formation, a feature they oddly share with the far more delicate-looking but equally dangerous Angel Stars.

The Defender's name is a reference to the Defender job class from the Final Fantasy series, as well as their prominent shields.

The Defender is a very difficult enemy due to the fact that any frontal attacks are blocked by its shield. The only way to damage it is to attack its back. It does a spinning technique that both damages Sora and turns it around to face him. Using Air Slide or Dodge Roll can outrun this attack. Not only that, but it will allow you to face its back, the weak spot. It also uses magic attacks, though they are not very difficult to dodge. Just keep attacking its back with physical attacks and it will soon fall. 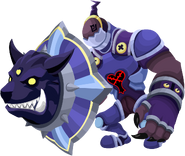 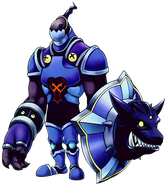