Template:World Deep Space is a world from Kingdom Hearts Birth by Sleep. It is based on the Lilo & Stitch films, specifically on the intergalactic portions. It is the most recent Disney animated feature to be incorporated into the Kingdom Hearts series, and the second-most recent feature overall (after Pirates of the Caribbean: The Curse of the Black Pearl).

Template:Q Terra is the first person to appear in this world. After fighting a swarm of Unversed in space, he is swept onboard the Federation ship. He is placed, unconscious, in a prison cell and is visited by Captain Gantu and the Grand Councilwoman. He wakes up to a swarm of Unversed attacking the prison, breaks free, and fights the Unversed. He meets Dr. Jumba Jookiba who convinces him to unlock his cell so they can find Experiment 626, who is imprisoned somewhere on the ship. When they find him and release him, Experiment 626 snatches Terra's charm. When Terra refers to it as his bond with his friends, Experiment 626 drops it and runs, to Jumba's surprise. To demonstrate that his experiments do not have hearts, Jumba activates Experiment 221 to fight Terra. After the fight, Experiment 221 becomes deactivated and Experiment 626 returns. Terra talks to Experiment 626 about friendship before alarms go off. Experiment 626 and Jumba run off while Terra leaves the world.

In the ending credits, Experiment 626 gets his toy and puts it on the steering wheel as he flies off through space. 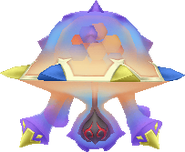 Metamorphosis
Add a photo to this gallery

Deepspace prisonerhold.jpg
The Turo Prison Block.
Add a photo to this gallery

Birth by Sleep
Retrieved from "https://kingdomhearts.fandom.com/wiki/Deep_Space?oldid=503825"
Community content is available under CC-BY-SA unless otherwise noted.