Deep Jungle is a world that appears only in Kingdom Hearts and Kingdom Hearts Final Mix, based on the 1999 Disney film, Tarzan. It is home to Tarzan and his ape tribe, as well as a group of explorers trying to learn more about the gorillas.

In the Gummi Ship, Donald and Sora argue on whether or not to land in Deep Jungle. Sora says that Kairi and Riku may be there, but Donald says that The King wouldn't be in "a backwater place" like it, so they should move on. Sora pleads with Donald to land so they could at least check, but when Donald refuses, Sora ends up fighting with him over the controls, crashing the Gummi Ship on the world itself, and Sora, Donald and Goofy are separated afterwards.

Sora falls into a treehouse, where he is attacked by Sabor, but is saved by Tarzan. He is then brought to a tent by Tarzan, where he meets Jane and Clayton, who found Donald and Goofy. They had found a Gummi block, assuming that the King might be there.

Sora wants to know if Tarzan has seen Kairi and Riku, so they collect some slides for Jane to help communicate with him. One of the slides shows Hollow Bastion, which Sora vaguely recognizes; although he does not understand how, since he has never left Destiny Islands, his déjà vu is due to Kairi's heart sleeping within him.

Sora is asked by Jane if he wants to meet the gorillas, to which he replies yes, hoping they know the location of Riku and Kairi. Together with Donald, Goofy, Clayton, and Tarzan he meets Kerchak and Kala. Kerchak is not pleased with Tarzan potentially revealing the secret nesting grounds of the gorillas, and he sends him away.

After this, Clayton goes hunting for gorillas. Upon arriving at the Tree House, Donald sees Clayton about to open fire on Terk, and intervenes. Clayton claims he was saving her from a snake, but his actions make everyone suspicious. Afterward he is on his own, and without anyone to protect him, he is attacked by Heartless. As Heartless arise due to Clayton's growing darkness and anger, the Powerwilds try to capture the gorillas, so Sora must defeat enemies in every area except Hippo's Lagoon, Tent, Treetop and Tunnel to save each gorilla to advance on (each Gorilla giving Sora a Gummi block as thanks). He disappears, leaving his pipe on a rock. Searching for him, Sora's party finds the pipe, only to be attacked by Sabor one last time.

While Sora kills Sabor, Jane and Terk are abducted by Heartless. They save them and together with Tarzan, the two battle Clayton (now transformed by darkness), and Stealth Sneak. They win Kerchak's trust by winning this battle and he throws Sora to the waterfall, where he closes the Keyhole. The Jungle King Keyblade is obtained by closing the Keyhole.

Throughout this world, Donald and Sora are resentful towards each other because of their prior argument, but they ultimately reconcile when they locate the world's Keyhole.

Sora enters Deep Jungle alone and at the Tree House, where he battles Sabor and meets up with Tarzan. Jumping down from the netting below the house sends Sora into the Tunnel, where he can either use the save point, access the Treetop and Climbing Trees to head back to the Tree House, or jump into the log and begin the Tree Surfing mini-game.

Tree surfing takes the party to the Camp, where at the Tent within the party can meet with Jane and use the save point within. The east exit from the camp by the stove and experiment table leads to the Hippos' Lagoon, which can only be traversed with swimming, good timing, and well-aimed jumps. Heading across the Lagoon takes the party to two areas, Vines and Vines 2, which are home to the Vine Swinging mini-game. Vines 2 in turn leads back to the Climbing Trees.

Heading out the north entrance of the Camp by the clothesline takes the group to the Bamboo Thicket, and continuing through the Thicket leads to the Cliff. After the last battle, Sora and his party gain access to the Waterfall Cavern. Sora and party are required to climb up the cavern. At the top of the cavern is an entrance to the Cavern of Hearts, the supposed heart of Deep Jungle, where the sound of the waterfalls echo and where the Keyhole is sealed.

Notice that in the Climbing Trees area of this world, there is a different means of moving through out the area called Vine Swinging. This is simply the process of jumping from one vine to the other to get from platform to platform.

Deep Jungle is the only Disney world from the original Kingdom Hearts that does not appear in Kingdom Hearts: Chain of Memories, any other game, or the manga adaption. This is most likely due to the estate of Edgar Rice Burroughs still holding copyrights to the Tarzan character and later Tarzan books still under copyright, and Square Enix unable to secure the rights to use them. Creator Tetsuya Nomura did intend to add the world into the game as seen in a rough sample of the game being made.

In the Camp, right outside the tent, there is a table with some objects on it. Among them is a teapot and a cup which bear a resemblance to Mrs. Potts and Chip, as was also seen in the movie.

After completing the events that transpire within Deep Jungle, there is a cutscene which depicts a captured Princess of Heart before the Disney villains. If the player has already locked Wonderland, this is Alice, but if they have not, it is Snow White. 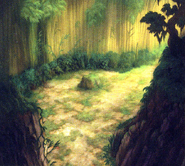 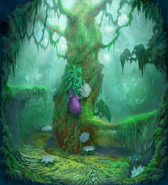 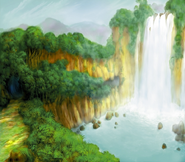