If a friend needs me to be there, I'll be there!

Data-Sora is a playable character in Kingdom Hearts coded and Kingdom Hearts Re:coded. He is a digital replica of Sora that King Mickey used to investigate a computer simulation of Jiminy's Journal, and though he behaves much like the real Sora, he is thought to not be an actual person.

Data-Sora displays the exact same personality as the real Sora in Kingdom Hearts and Kingdom Hearts: Chain of Memories, and is also fully aware that he is merely a digital copy, though he doesn't mind his status much.

Data-Sora looks exactly like the real Sora did in Kingdom Hearts and Kingdom Hearts: Chain of Memories. He is tanner and somewhat lankier than his rival Riku. He seems to portray more of a typical teenage boy's looks. Data-Sora has spiky brown hair along with blue eyes. His outfit greatly resembles that of King Mickey, containing large yellow shoes, a white and black overjacket as well as a red jumpsuit and a pair of white with yellow gloves with his signature crown necklace and crown chain.

In Kingdom Hearts coded, a Sora made of data is created by King Mickey to go on a mission to solve a mysterious message written in Jiminy's Journal saying "We must return to free them from their torment." (changed to: "Their hurting will be mended, when you return to end it" in Re: Coded). Because the journal is corrupted by a bunch of computer bugs in the form of data blocks, this Sora is created to destroy them.

The actual Sora does not appear until the very end, and the Sora in this game is a computer A.I. created from data from Jiminy's early journal entries. When he first wakes up, he finds himself in Awakening, where he first obtains the Keyblade. After that, he travels to each data world to fix all the Bug Blox Corruption there.

The Data-Sora meets King Mickey, Donald, Goofy, and Jiminy in Disney Castle. After Data-Sora appears in the castle, a mysterious person in Organization XIII's Black Coat appears and reveals himself to be Jiminy's Journal incarnated in Riku's form. After the Journal explains the situation to them, Data-Sora sets off to fix the data worlds. He also asks the Journal if they are just artificial data. But the Journal said it doesn't matter as long as they will help their friends, which puts Sora's heart at ease. After he heals Olympus Coliseum's Bug Blox Corruption, he meets the real-world Pete.

After he heals Agrabah's Bug Blox Corruption, the Data-Sora finally catches up to Pete and is attacked by the real-world Maleficent, who destroys his data Keyblade. Mickey and Jiminy's Journal arrive and dispatch the Heartless, but the journal is abducted by Pete and Maleficent. Mickey gives pursuit, and Data-Sora, unable to defend himself without the Keyblade, makes his way through the data Hollow Bastion, reuniting with Donald and Goofy along the way. As they progressed through the castle, the Data-Sora begins to feel the real Sora's heart and recalled his memories. They engage Pete in a battle.

Pete taunts Data-Sora for merely being made of data, like his Keyblade, and the fact that Data-Sora doesn't have a heart, which frustrates him. Donald and Goofy defend that he's as real as the real Sora, has a heart, and that their hearts are connected. This grants Data-Sora the use of the Keyblade again. Data-Sora then fights and defeats Pete, but Pete calls out the journal, placed under his control through the use of Bug Blox. Data-Sora fights the Journal three times, each with an increase in the Journal's strength, but manages to defeat him. A Keyhole is opened, and Mickey says that unless the Bugs are destroyed, the Journal will never awaken.

Data-Sora, resolving to awaken the journal, enters Data-Riku's Data world, where he meets a separate Data-Riku, but at the same time loses all his abilities in the form of crowns. In order to recover these, Data-Sora visits the memories of this Data-Riku, including the worlds he has been to. Afterwards, the two continue into Hollow Bastion, where they encounter the journal once again, infested by bugs. Data-Sora defeats the Journal, regaining his abilities in the process.

Sora then encounters and defeats Maleficent's dragon form, and Mickey finds that soon he and his friends will be returning to the real world. Although, after the journal has been restored, the Data-Sora will lose all of his memories. The journal soon reaches 100% completion and is ready to be erased, but Data-Sora wants to save Pete and Maleficent, who are still in a part of the data world, only partially erased.

Data-Sora finds them battling the real Sora's Heartless, but before he can help them, Maleficent and Pete are seemingly erased from existence. Data-Sora fights and defeats the Heartless. Data-Riku reveals he saved Maleficent and Pete through a rift in the Journal's data and escorts them out. Mickey finally returns to the real world. But the door to a new world has opened. The journal explains that it is the data world of the data that was added in it. Mickey, realizing that it will now be dangerous for Data-Sora, who has lost his memories, to venture out on his own, requests to be taken into the data world once again.

It is eventually revealed to Data-Sora that within his real self lies the destiny to save Roxas, Axel, Xion, Terra, Ventus, Aqua, and the real Naminé herself from their hurting. Data-Sora then thanks Data-Naminé, thus keeping the promise the real Sora made at the end of Kingdom Hearts: Chain of Memories, as Mickey returns to the real world, writing a letter to inform the real Sora of what he has learned.

As Data-Sora is based off of the real-world Sora, he fights exactly the same as his real-world counterpart. His primary ability to destroy the Bug Blox Corruption is the Debug Ability, which he must use every time he visits a world and engages in battle. Utilizing a basic ground combo comprised of three hits and an aerial combo that ends in a powerful spin-slash. Data-Sora is also able to use the Command Matrix system to equip various attack and magic abilities.

Data-Sora utilizes this mighty blade to fend off both the Heartless and Bug Blox alike. Data-Sora gained the Keyblade in the Data Awakening, but lost it to Maleficent in Agrabah, where she destroyed it. Eventually, though, he gets a new one in Data Hollow Bastion. The new Keyblade he gets is strongly connected to the Power of the Heart, as stated by King Mickey. 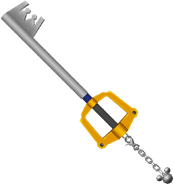